Brewers On Deck tickets on sale 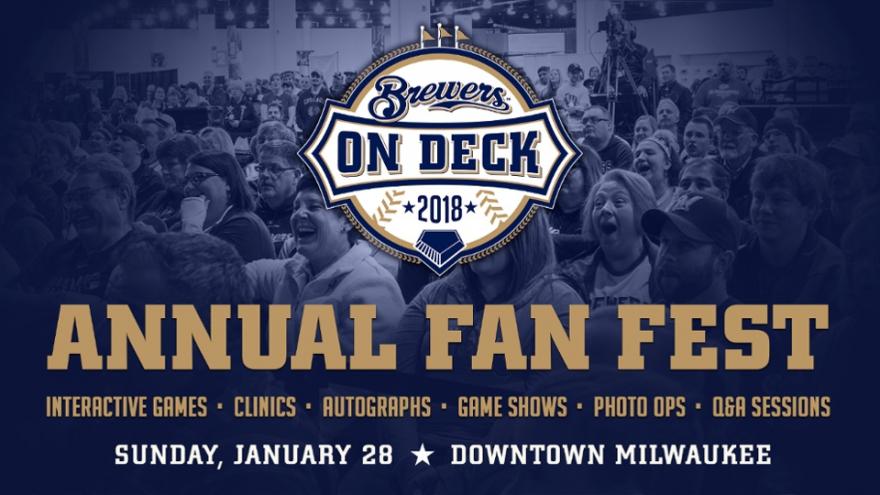 MILWAUKEE (CBS 58) – The Milwaukee Brewers announced that tickets for Brewers On Deck 2018 are now on sale. Set to take place on Sunday, January 28, 2018 from 10:00 a.m. – 5:00 p.m. at the Wisconsin Center, Brewers On Deck is the winter fan festival that bridges the gap between the Wisconsin winter and Spring Training.

New for 2018 is a special event called “Breakfast with the Brewers.” Fans who purchase this unique ticket package will have a special opportunity to eat breakfast with Brewers players, coaches and alumni prior to the start of Brewers On Deck. Each table will include at least one Brewers player, coach, personality or alumnus; receive a ticket to the main Brewers On Deck event, a special autographed and engraved bat, and a photo with the player/coach/alumni who dines at their table. This opportunity will only be available to a small number of fans (priced at $175, available in advance only) and will go on sale as an add-on option when fans purchase their Brewers On Deck advance tickets.

Tickets for Brewers On Deck may be purchased at Brewers.com/ondeck, by calling 414-902-4000, and at the Miller Park Box Office.

Fans who purchase a ticket before December 1 will receive a voucher for a ticket to a select 2018 Brewers home game in April.

Brewers On Deck will feature a number of activities for the entire family. Autographs and photos from Brewers players, coaches and alumni, interactive games, Q&A sessions and game shows with Brewers players, coaches and broadcasters, vendor booths with baseball memorabilia, the Brewers Community Foundation Treasure Hunt and live auction, as well as many other activities will all be a part of Brewers On Deck.

More details regarding player appearances and event activities will be released later.