Brewers give away Spring Madness prizes in morning scavenger hunt 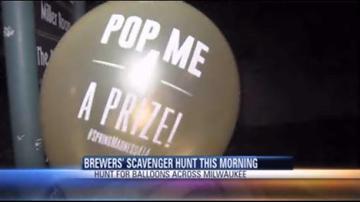 MILWAUKEE -- They say the early bird gets the worm, and this morning, The Milwaukee Brewers offered early morning treats of their own with a city-wide scavenger hunt.

The scavenger hunt, which kicked off at 5 a.m. Tuesday, is a way to welcome Spring Madness during the Brewers' current nine-game, 11-day home stand.

Here's how you win:

More than 500 balloons were placed around the city in a variety of locations and landmarks, including Miller Park.

Each balloon contained a voucher for a pair of tickets to a Spring Madness 414 game at Miller Park, May 13-15, when the Brewers host the Pittsburgh Pirates.

Some balloons had vouchers for autographed baseballs, game-worn jerseys, and a one-night stay in a suite at Miller Park.