Brewers Fans Bundle Up for Tailgate Parties Before Exhibition Game 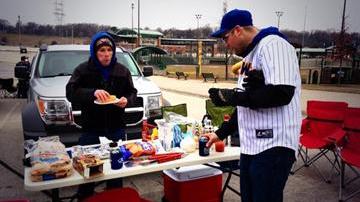 MILWAUKEE-- A chilly day for baseball at Miller Park, but Brewers fans still brought their grills and stereo systems for the tailgate party before Friday night's exhibition game against the Kansas City Royals.

\"We got some Johnsonville brats on the grill,\" said Matthew Flynn, a Brewers Fan.

Brats, buns, and Black Angus burgers were all thrown on the grill to keep Flynn and his friends warm.

\"I've been to below zero, Packers tailgating parties where it's snowing and windy and a lot worse than this,\" said Rebecca Thiel, laughing \"so I can handle!\"

Flynn and Thiel are among the first tailgaters to arrive at Miller Park.

\"This year, it's a little colder than normal,\" said Flynn.

\"We have blankets and winter jackets and boots, so we'll make it through,\" said Thiel, \"but can't wait to get inside!\"

Opening Day may be a few days away, but many fans wanted to start baseball season early.

\"We're here because we can't be at Opening Day, so we are enjoying the exhibition games.,\" said Flynn.

Many hoping that 2014 will be the Brewers big year.

\"The Brewers are doing better every year and if everyone can stay healthy, it will be a good year,\" said Flynn.