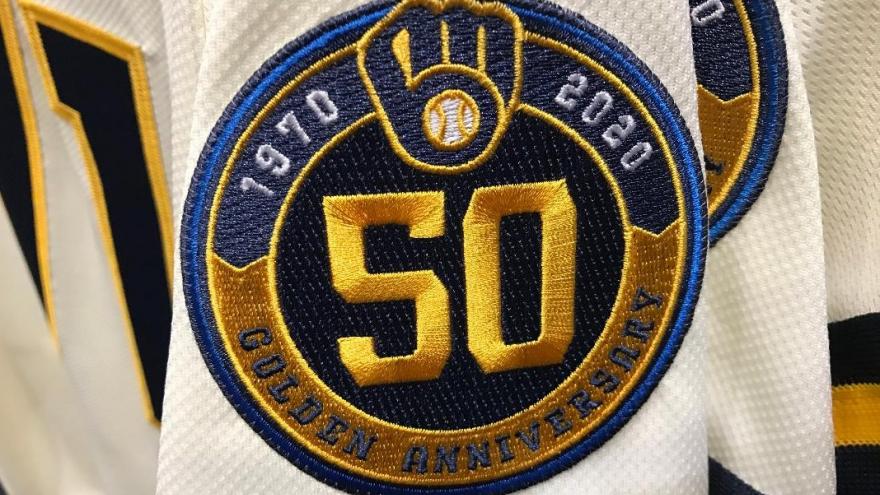 MILWAUKEE (CBS 58) -- The Milwaukee Brewers have re-branded their logo going into their 50th season. It’s a little bit back to the future like Mark Attanasio said.

CBS 58 Sports Reporter Scott Grodsky: "Rick you have the ball and glove logo now. What was it about this iconic look that you guys wanted to bring back at this time?"

Milwaukee Brewers President of Business Operations Rick Schlesinger: "We had a four year process to figure out how we would do a new identity system and one thing that became clear is that the fans love ball and glove as a primary logo it made complete sense to do it and we made some modernizations or upgrades if you will. The ball and glove are now connected. The ball is now centered in the middle and instead of one seam that looked like a tennis ball it now looks more like a baseball."

CBS 58 Sports Reporter Scott Grodsky: It’s more than just the ball and hat, pretty much everything has been redone and a lot of it from the cream color to the arm patches was done to honor the heritage off Milwaukee. How important was it to you guys to have more than just the Brewers but the city and the state honored?"

Milwaukee Brewers President of Business Operations Rick Schlesinger: "One thing about baseball is we have such a rich past. I think the fans really want to respect the past and bring it to life so for the cream color for example it represents the cream city brick that is so famous in Milwaukee’s architecture. We have a 50th anniversary patch to celebrate 50 years in Milwaukee and we have different patches like the state of Wisconsin patch with bricks and the patch with weed seems to represent the heritage of brewing in Milwaukee."

CBS 58 Sports Reporter Scott Grodsky: "Were you surprised at the reaction from Fans?"

Milwaukee Brewers President of Business Operations Rick Schlesinger: "I thought they would like to work but I was a little nervous because whenever you modify an iconic look like the ball and glove you are going to get some criticism of why did you mess with a good thing but I think the fans appreciate that we made some subtle changes but we kept true to the heritage."