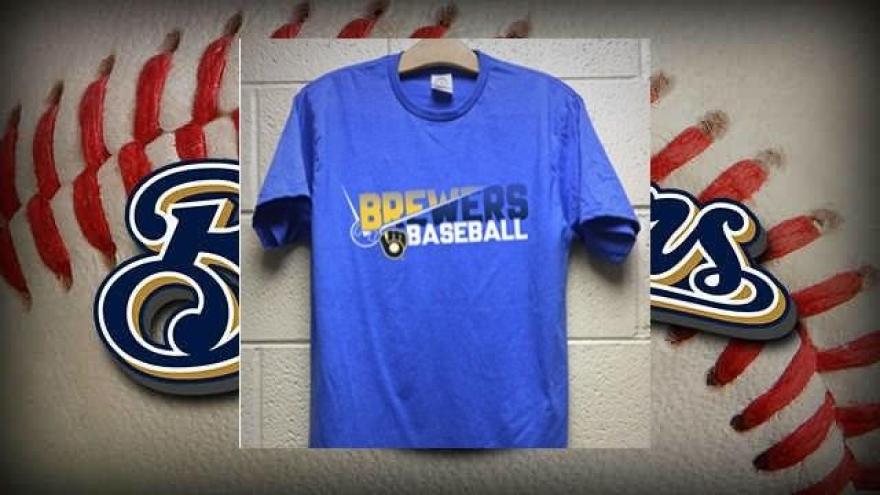 On Sunday the Milwaukee Brewers unveiled the winning design of the “Fan-Shirt Friday Design Contest” that was staged on Brewers.com over the last several weeks. The winning design, created by Haley Hurst, will be used as the June 16 Free-Shirt Friday Giveaway sponsored by Hupy and Abraham. Hurst’s design was unveiled in a special Klement's Main Stage event at Brewers On Deck, the team’s official off-season fan fest.

The first 20,000 fans in attendance during each of the five Free-Shirt Friday Giveaways will receive a complimentary Brewers–themed T-shirt (available in youth large, adult medium, adult XL, and adult XXL).

Artists from across the country submitted their designs to Brewers.com. After nearly a hundred submissions were received, three finalists were selected and put to a vote for all fans at Brewers.com. Haley Hurst’s Brewers Baseball Design won with 46% of the vote.

Haley will not only have the honor of having her artwork made into a promotional item for the first 20,000 fans, but will also receive an assortment of additional prizes. This includes 50 shirts featuring her winning design as well as a signed and framed photo of a Brewers player wearing the shirt. In addition, she will receive four Field Infield Box tickets to a 2017 Brewers home game and the opportunity to watch batting practice on the field prior to the contest.

All five Free-Shirt Friday Giveaways were revealed on the Klement's Main Stage with help from several of the Brewers top prospects.

While single-game tickets are not yet on sale, fans can guarantee their spot at Miller Park for Haley’s Free-Shirt Friday giveaway on June 16, as well as other popular Brewers 2017 giveaways, with a “Brewers Flex 10-Pack.” This plan allows fans to choose their 10 games and gives an 11th game of their choice – even Opening Day - for free.

Fans can help pass the time until Opening Day by following the Brewers on social media. They can enter to win a variety of prizes including autographed memorabilia, a Brewers 10-Pack, and tickets to Opening Day, by sharing their favorite Brewers traditions on Twitter and/or Instagram using the hashtag #SeeUApril3. For additional information please visit brewers.com/tradition.