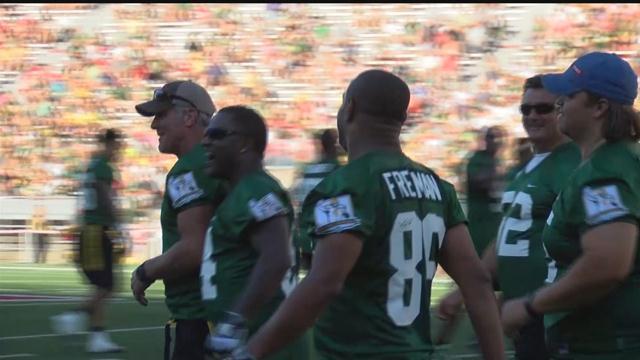 It was a great way to wrap up the weekend with Favre's induction into the Packers Hall of Fame.

It was a chance for fans to see former NFL players.

But for the players, it was about bringing old friends together.

By the looks of it, the \"Grateful Red\" turned into a sea of green and gold Sunday afternoon as fans packed Camp Randall.

Brett Favre teamed up with his former Packers to take on former NFL stars led by Donovan McNabb for what he hopes is the first of many contests.

\"I'd like to do it in Green Bay some day, I think everyone would. It was a great crowd today,\" said Favre. \"I really can't think the people enough for coming.again it's not about seeing Super Bowl type football, it's about seeing old faces.\"

The old-timers did not miss a beat.

Favre threw the ball and made plays on Sunday with former teammates including Andre Rison.

\"He was out there calling plays like it was Super Bowl 31,\" said Rison. \"Last drive went down and we scored, Hit me on something and then hit Freeman for the touchdown.\"

An unfamiliar name, but just as important to the reunion, equipment manager John Blaha, who worked on the Super Bowl 31 team.

Brett since day one has been a charitable man,\" said John Blaha. \"A lot of quiet charitable things happen in the locker room that no one will ever know about. And he doesn't want them to know. There are other players like that, and hearing what he said last night, about every player he's played with being up there with him.\"

After today's flag football game, Antonio Freeman spoke candidly on Favre leaving the Packers, and coming back to repair the once broken relationship.

\"They said it was over for him,\" said Antonio Freeman. \"He said it's not. So he wanted to prove the world wrong. I have nothing wrong with an athlete who calls his own shots and finish it his way.\"

The game wrapped up shortly after six o'clock Sunday evening, and Favre's legends team won the game, beating McNabb's all-stars by one touchdown.