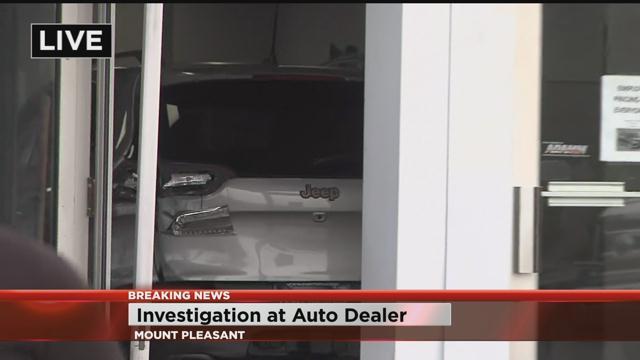 Two dealership burglaries occurred between 1:44 AM and 3:10 AM Thursday Morning at Palmen Chrysler on Washington Ave. in Racine, as well as Racine Toyota on Kilbourn Dr.

At Palmen Chrysler, suspect(s) smashed the glass to a showroom door to gain entry, then attempted to steal a Jeep Cherokee off the showroom floor by repeatedly driving it into the glass showroom wall. The attempt was unsuccessful and the Jeep was abandoned, wedged halfway out the building, still running. Suspect(s) unsuccessfully attempted to steal another vehicle on the showroom floor.

At the time of this press release it is unknown if any vehicles were stolen from either dealership. Officers remain on scene at both dealerships and the investigation is ongoing.

Officers responded to an alarm at 1:44 AM for Palmen Chrysler and later found the burglary to Racine Toyota when checking the other dealerships.

Suspect(s) may still be in the stolen Ford Escapes (one white one Grey) from the Porcaro Ford July 4th burglary.

Anyone with information on this incident is asked to call the Mt. Pleasant Police Department at 884-0454 option #4 or Crime Stoppers at (262) 636-9330, via e-mail through the website www.racine.crimestoppersweb.com, or by sending a text message to CRIMES (274637) and typing in TIP417 with your text message.