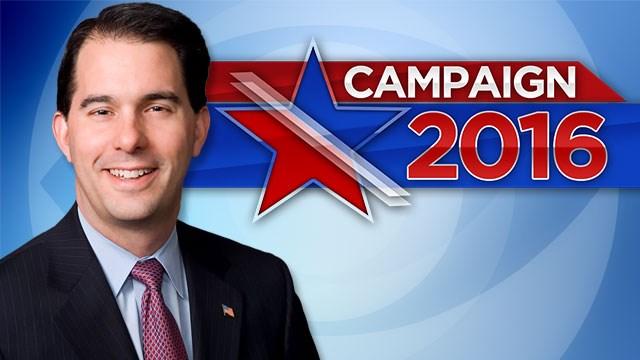 Although his official announcement is not expected until Monday evening, Governor Scott Walker has made it known he will seek the Republican nomination for President of the United States in 2016.

In a busy Monday morning on social media, Walker tweeted, \"I'm in. I'm running for president because Americans deserve a leader who will fight and win for them.\"

\"The message tonight is he's a fighter that will fight and win for you,\" Walker's National Press Secretary AshLee Strong said.  \"We've seen a conservative governor in a blue state take on big, bold reforms, and big challenges and come across the finish line with victories. We're looking to do that on the national level.\"

Strong said they will use Walker's Wisconsin blueprint for a national campaign.

\"Governor Walker has proven through three elections in four years is a successful record,\" Strong said.  \"In doing that, he achieved controversial reforms that have won that have worked well for the state. We look forward to taking that same aggressive posture in this election and providing results in November.\"

\"Governor Walker and his family are middle class Americans who understand the challenges that millions are facing across the country,\" Strong said.  \"He's an approachable, relatable person and Americans want that.  They want someone that understands the needs, the challenges they're facing, the problems. They want a problem solver and that's what governor Walker will ultimately provide.\"

His campaign also released a new video where he officially declared his candidacy. You can watch the video here:

In a crowded field of more than a dozen Republican candidates, Walker's standing in the 2016 polls is relatively decent, so far. In a recent Fox poll of likely Republican voters, Walker tied for fourth place. A recent NBC/ Wall Street Journal poll put him in second place.

Stay with CBS 58 as we continue to bring you team coverage of Walker's announcement, including his live remarks from Waukesha on the CBS 58 News at 5.