Breaking Down a Contested Convention 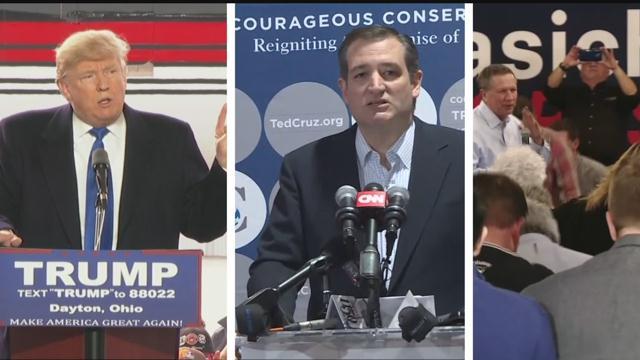 A true contested convention hasn’t happened since 1952. With each passing primary and caucus, the likelihood of one happening in 2016 looks more like a reality, especially on the Republican side. A contested convention happens when none of the candidates have a majority of delegates. Delegates are awarded based on primary and caucus results in each state.

As it stands, Donald Trump has 743 delegates, Ted Cruz has 545 and John Kasich has 143. In order to have a majority, a Republican candidate needs 1,237 going into the convention. If no one goes in with a majority, some delegates may only be required to vote for their candidates in the first few rounds.

There is no limit on the number of rounds delegates will vote, which by rule, is done orally. The convention is scheduled over four days. In a typical year, the convention is a formality. A presumptive nominee will already have a majority, and voting is symbolic. In a contested convention, the votes will be crucial.

If a majority is not reached after the first round of voting, that’s when Paul Nolette, Associate Professor of Political Science at Marquette, says names like Paul Ryan come into play.

“On the first ballot, the delegates are pledged to whatever candidate as a result of their primaries or caucuses in their state. But after that ballot, most delegates at the Republican Convention will be able to vote for anybody they want, anybody at all,” said Nolette.

“Then more and more get freed up to the point where 100% of the delegates can vote for anyone they want. So really, after that first ballot, it becomes far more open and fluid of a process.”

The man who will lead the convention, Republican Chair Reince Priebus, has doubts about the likelihood that someone who isn’t running will secure the nomination, specifically Paul Ryan, who will serve as a chair at the convention.

Priebus acknowledged Ryan also said he had no interest in the job as House Speaker, but he ultimately ended up in the position.

“I understand the history, but I do think you have to actually have some sort of operation in Cleveland to be able to pull something like that off,” said Priebus.

Even if a candidate does go in with a majority, a group called the Rules Committee has the power to change how voting works. The committee is made up of 112 members, two from each state and the six territories. These delegates tend to be party elite and elected officials.

Currently, the standing rules are considered “draft rules.” The Rules Committee meets about a week before the convention to determine the rules for the convention. Normally, this group gets little to no attention. In 2016, Nolette says they could be crucially important.

While it’s unlikely, technically, even if a candidate goes in with a majority, the rules committee has the power to unbound delegates in the first round of voting. That action would make it more likely another candidate could secure delegates who were not awarded to them in a primary or caucus.

“In the political convention, the rule is there are no rules expect for what the Rules Committee comes up with,” said Nolette.

With so many unanswered questions and hypothetical scenarios, do primaries and delegates even matter? Both Nolette and Priebus say, yes.

“The past and remaining primaries and caucuses are still extremely important because they’re going to help determine the amount of support that each candidate has going into the convention,” said Nolette.

“The Republican Party is choosing a nominee. The voters are empowered by the fact that their votes end up giving delegates to each of the candidates that are bound to vote for the candidates in these ballots,” said Priebus.

The Republican Convention is scheduled for July 18-21, 2016, in Cleveland, Ohio. To learn more about how the convention works, click here.