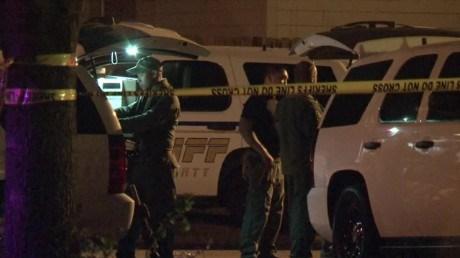 (CNN) -- Deputies discovered the bodies of five children and three adults in a Houston-area home after a standoff with a suspect holed up in the house ended early Sunday.

The incident started late Saturday night after authorities responded to a call to perform a check on the residence, said Thomas Gilliland, a spokesman for the Harris County Sheriff's Office.

It was unclear who made the call.

When the deputies arrived at the scene, they tried to summon someone to the door, but no one showed up, Gilliland said.

\"Information was obtained that a male was in the home and had a warrant for an aggravated assault on a family member,\" the spokesman said.

Deputies surrounding the house saw a child's body through the window and decided to enter the home, according to Gilliland. The suspect started shooting from inside the house, forcing them to pull back and call in hostage negotiators and a unit that specializes in high-risk situations, he said.

Negotiators talked the suspect into coming out and then arrested him, Gilliland said.

\"Upon entering into the home ... to check for the welfare for any other people in the house, the bodies of eight victims were found inside the residence,\" he said.

The spokesman said authorities have been called to the home before, but the nature of the calls was not available.

It's unclear how the victims were killed, whether they are relatives, or their ages and genders. A homicide team is investigating.

No more information was immediately available.