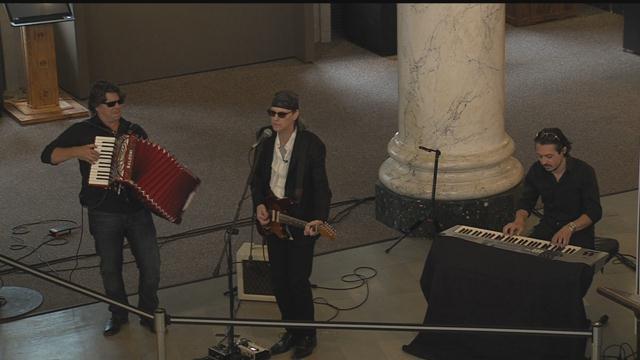 The Milwaukee County Historical Society hosted an anniversary celebration Thursday and exhibit opening for the BoDeans.

A mayoral proclamation was presented to declare the day "BoDeans Day" and  the first performance of their new single, "My Hometown," was performed.

Guests who gathered for the opening were treated to free samples of the new Sprecher BoDeans Original Ginger Brew.

The celebratory exhibit of the BoDeans' 30-year history is available beginning on June 16 and continuing through the fall at the Milwaukee County Historical Society.

"Unbelievable," declared founding member Kurt Neumann. "A lot of this stuff in the museum here was stuff that was just sitting in boxes and closets and stuff. I just grabbed and saved through the years. To put it altogether you just go wow. You forget how far you've come and all the stories and situations."

Best known for their catchy single, "Closer To Free," the band's accessible adult alternative sound has led to many a milestone, including a Rolling Stone Reader's Poll For Best New American Band in 1987, and support slots with U2, Bob Dylan, Paul Simon, Tom Petty George Thorogood, The Pretenders, David Bowie and numerous others.

Appearances at Farm Aid, Summerfest, ACL Festival and others followed, along with TV appearances on "Saturday Night Live," "Letterman," "Today," "Imus," CNN, and ESPN, to name a few. BoDeans have a permanent installation at the Rock and Roll Hall of Fame Museum in Cleveland as part of their Midwest Artists exhibit. After multiple chart-topping radio singles, and movie and TV placements, BoDeans have defined a sound that a generation embraced - songs like "Good Things," "You Don't Get Much," "Idaho," "If It Makes You," "Closer To Free," "Stay," and "All The World."

BoDeans signed their first recording contract with Slash/Warner Brothers Records in 1985 and their debut record, "Love & Hope & Sex & Dreams" was released in May, 1986. Since then, they have released 12 studio albums with ten records that hit the Billboard Top 200 Chart, and numerous singles on the Mainstream Rock, Top 40 and Triple A radio charts.

Few would expect them to still be going strong - so many years after Wisconsin's favorite musical sons first formed, but they've proved as energetic and determined as they did on day one. Their music will be featured throughout the new Netflix original series, "The Ranch," which premiered in April and features Sam Elliott, Ashton Kutcher, Danny Masterson and Debra Winger.