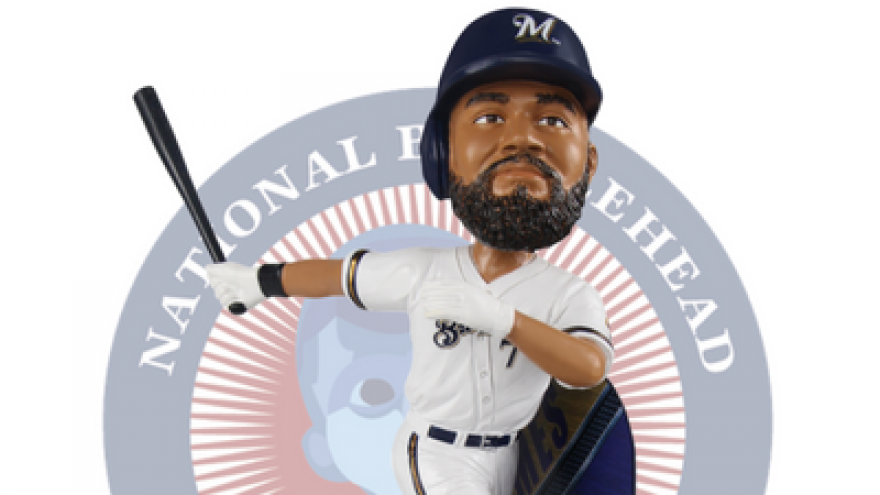 The National Bobblehead Hall of Fame and Museum unveiled a limited-edition Eric Thames Milwaukee Brewers bobblehead. Thames took the baseball world by storm when he set a Brewers record by hitting 11 home runs in April after spending three years with the NC Dinos of the Korea Baseball Organization. Thames ended April with remarkable stats which included a .345 batting average, an .810 slugging percentage and a 1.276 OPS. Although Thames has cooled off from his record start, his contributions have helped keep the Brewers near the top of the NL Central Division.

Thames was selected in the seventh round of the 2008 MLB Draft by the Toronto Blue Jays. He made his MLB debut on May 18, 2011 with the Blue Jays, but was traded to the Seattle Mariners on July 31st. Thames spent 2013 in the minor leagues before heading to South Korea in 2014 to play for the NC Dinos of the Korea Baseball Organization.

Nicknamed “God” by Korean baseball fans, Thames quickly became Korea’s most famous player. The 30 year-old Thames thought he would never make it back to the Major Leagues, but hard work and perseverance paid off as the Brewers offered Thames a three-year, $16 million contract prior to the 2017 season.

"Brewers fans are among the most passionate for both their team and bobbleheads,” said Phil Sklar, Co-Founder and CEO of the National Bobblehead Hall of Fame and Museum. “With Thames’ great start, we received many requests to produce a bobblehead, so we worked as quickly as possible to make that happen.”

The limited edition bobbleheads are now available for pre-order with delivery expected by September. The bobbleheads are $35 each with a flat rate shipping charge of $8 per order to the U.S. and $25 to South Korea. The bobbleheads were produced for the National Bobblehead HOF and Museum by Forever Collectibles and are officially licensed.