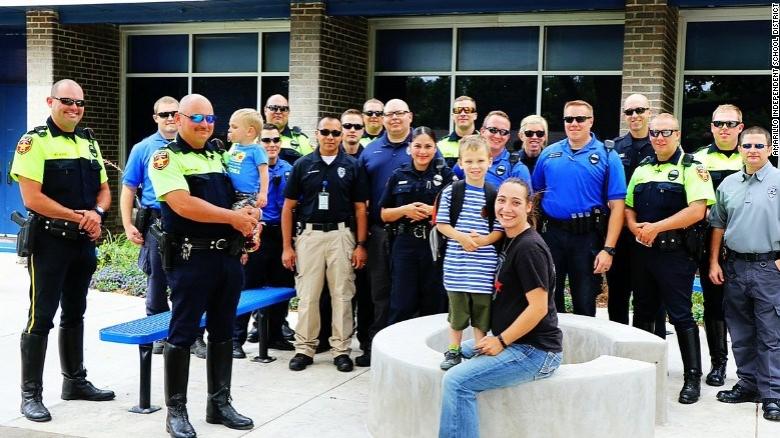 (CNN)The very first day of school for a child is always hard. But it was even harder than usual for 4-year-old Jackson Scherlen, who started pre-K this week without his father.

His dad, Amarillo, Texas, police Officer Justin Scherlen, died two weeks ago after complications from a crash while he was on duty. But Jackson didn't have to walk up to the doors of his new school alone. Scherlen's brothers and sisters in blue were with Jackson every step of the way.

A ton of officers showed up at Jackson's elementary school when he started his first day. They lined up to wish him good luck. And they gave hugs.

After losing his police officer dad, he has an army of stand-ins for this important first. #firstdayofschool2016 pic.twitter.com/BwtRMRuNmf

It meant everything to Jackson and his mom.

"He was shocked when we first showed up and saw everything," Jessica Scherlen told CNN affiliate KVII. "I think Jackson really enjoyed having everyone here. Just to know that he's still loved by the blue family and that they still care. Emotionally, it's awesome to see."

It was equally gratifying for Justin Scherlen's fellow officers.

"I'd give it all back just to have Justin here with his son," said Officer Daniel Smith. "At least we can be here for him and let Jackson know that he always has someone to call on."