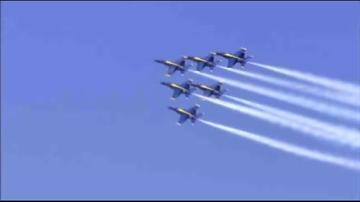 MILWAUKEE- Pilots with the U.S. Navy Flight Demonstration Squadron, the Blue Angels, will fly over the city of Milwaukee on Wed., June 18, for a scheduled team photo shoot.

over Lake Michigan on the eastern side of Milwaukee at approximately 250 knots.

This is not a media event; the photo shoot is for the team's photographers only, but will be visible to the general public.

and 64 performances at 34 locations in 2015 throughout North America, including the Milwaukee Air and Water Show this weekend.

It marks the first time the Navy pilots are in the show here since 2010.