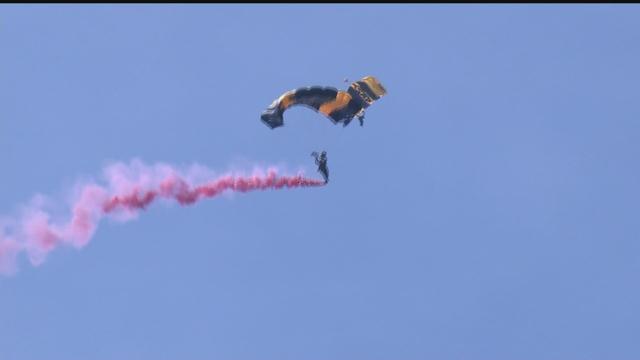 Announced Tuesday, all flights are canceled for 2016's Milwaukee Air & Water. Organizers say scheduling conflicts with Summerfest and money struggles have them refocusing on 2017.

The Breitling Jet Team swooped over Lake Michigan as part of last year's show which was also scheduled in July.

The July dates are later than what's been scheduled in years past as organizers aimed for better weather. But those days are also competitive,

"Weekends are always busy. The Air & Water show had moved around from weekend to weekend depending on the availability of a jet team so it wasn't set on any particular weekend. This year unfortunately it conflicts with other events that are happening," Upchurch said.

"We were put on the schedule for the last weekend of Summerfest which unfortunately tied us up with hotel rooms and cars," show director Rudy Malnati said.

Moving the date of the event would mean no jet team. That - combined with difficulty raising money for the show - is the reason for the cancellation, Malnati said.

"We want to make sure the air show can keep going here. We're hoping that sponsors step up to the plate. This air show has not had a true title sponsor except for US Bank the one year," Malnati said.

"This would give us a year to hopefully put some money that we need for 2017. And the Blue Angels have graciously put us on the schedule for 2017," Malnati said.

So the air show has their 'big act' for next year but Milwaukee is losing out this year.

"Well it does bring in about 400,000 visitors and we estimate the economic impact of about $1.4 million," Upchurch said.

The event also benefits the Stars and Stripes Honor Flight which flies World War II and Korean War veterans to their memorials in Washington D.C.

No word on if this development will put any stress on their fundraising. The group told CBS 58 News that they have "no comment".