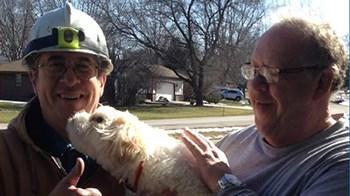 In 2012, an astounding little Lhasa Apso mix arrived at the Wisconsin Humane Society. He was blind and deaf, left only with his sense of smell and tactile memory to guide him through the world. We were blown away by his resilience and how determined he was to enjoy life regardless of its challenges. We were over the moon when our little wonder, Job, was adopted by the Densmore family four years ago and we've been in touch with them ever since, last seeing them at our 2015 gala where Boots greeted guests and proudly represented the countless special needs animals we serve each year.

When we received word of Job's latest achievement, we were beyond speechless. During his daily walk near their New Berlin home last Saturday morning, neighbors had mentioned smelling gas but didn't think much of it; Job, on the other hand, became very anxious which gave his family pause. They called in their report and received a swift response. When crews arrived to investigate the source of the smell, it was little Job who led them to a specific area where he began to bark and spin in circles. They pulled out their equipment and, sure enough, an underground gas leak was confirmed in the very spot where Job had alerted! We Energies worked tirelessly all day to repair the leak and we're so relieved to say it was caught before anyone was hurt. We are immensely proud of our little alumnus and we're so grateful to have a community whose generous support makes miraculous stories like his possible!