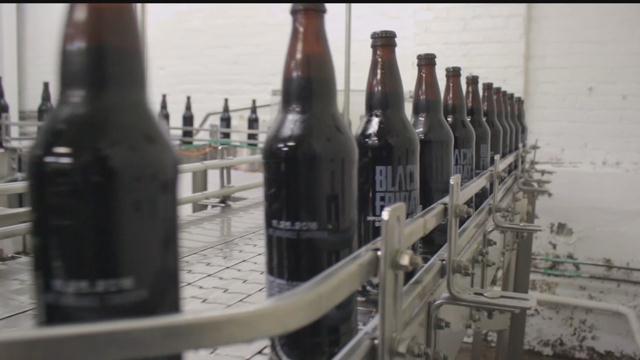 It's that time of year: when people start buying presents for the holidays. But some of the hottest Black Friday items won't be found in any store.

You'll have much better luck at breweries in Milwaukee Where the seasonal beer selection is hitting coolers.

At Lakefront Brewery about 4,000 bottles of "Black Friday" are ready to go on sale at 8 a.m. Friday morning. Russ Klisch, president of the company, says they will sell out in hours.

He also says there is good reason why.

"A lot of beers sometimes people talk about aroma. But this one has a huge aroma to it," Klisch said, his nose poking into a glass.

This is the fifth year that Lakefront Brewery has produced "Black Friday" which is an imperial stout aged for 10 months in bourbon barrels.

Klisch says customers seek out the beer because no expense is spared in the small batches with their rich vanilla, whiskey, and chocolate flavors.

"Every year we've sold out ever since we've done it. There's people who stand in line every year for this."

But Lakefront Brewery isn't the only place with a special holiday beer tradition.

A spiced Belgian Dubbel makes its return to Milwaukee Brewing Company this week. It's name is "Elf's Lament".

"It actually came from one of my favorite bands - The Barenaked Ladies. It's one of their Christmas songs," Kurt Mayes, lead brewer at Milwaukee Brewing Company, said.

"It's kind of the Christmas theme of sugar plums and fairies dancing around in your head," Mayes said.

Milwaukee Brewing Company produced about a thousand bottles this year and some will be sold in specialty liquor stores, Mayes said.

"It's a good dessert beer. You can have it with any type of cake or cookies. It goes well with anything like that," Mayes said.

Lakefront Brewery will start selling their Black Friday beer at 8 a.m on Friday. There is a limit of three bottles per customer until everyone waiting has gone through the line.

Past history has shown, it's gone pretty quickly.