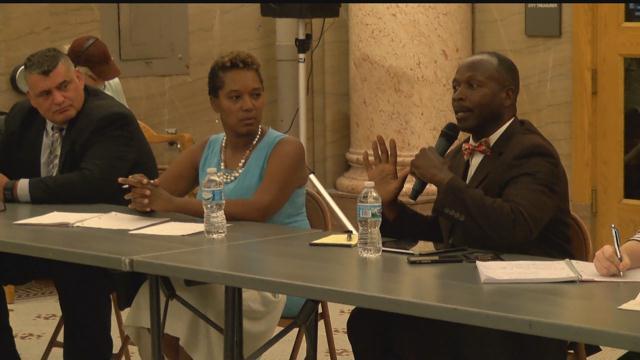 A little more than a month after unrest near Sherman Park, leaders are starting a conversation with the community.

Initially a small crowd Monday night due to the weather but as the night continued the crowd grew and the topics of conversation got deeper. What started as a quiet conversation stirred lots of emotions here at City Hall.

"You all have signed up to participate in a very difficult conversation this evening but you're here by choice," said Milwaukee Common Council President Mike Crevillo.

A conversation promising to discuss black lives, blue lives, all lives, open to the entire community with a goal of figuring out-where do we go from here?

"I think the truth of the matter is, without us building the communication that needs to happen were turning black and blue in our relationship and we need to change that," said Sen. Lena Taylor.

The discussion centered around programs that are working in other communities or are already in place in Milwaukee but just aren't being used.

But the conversations went deeper, with individuals pressing Milwaukee Police Association president Mike Crivello about why force is used.

"We do so because of the actions of an individual," he said.

Also asking when its OK to resist an officer.

"If something happens that you don't think is appropriate there's many avenues to make that complaints," he said.

As expected there were moments of tensions.

But ultimately, officials are asking those who came to go home with an open mind, saying its up to everyone in Milwaukee to effect the change they want to see.

"Not only are we listening but were actively to find solutions- how are we going to move forward in moving black and white and all races together?" asked Alexander.

Leaders we spoke with agree: the most effective change will come from the community first.