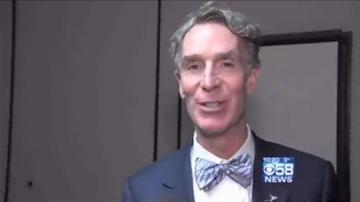 \"Well these people grew up watching the show,\" Nye told CBS 58 News, \"and it's very gratifying I mean I put my heart and soul into the thing and people still want to hear what I have to say.\"

Nye defended the theory of evolution in that debate. He says he's gotten all sorts of interesting feedback.

He showed a photo of a person who defaced a car writing Bill Nye the science lie.

\"Somebody out there hates me enough to to actually deface their own car.\"

But Nye also offered this observation.

\"I think that car was a caravan which has fuel injection. People use the technologies without really appreciating where it all came from. It's troubling.\"