Betting Big on the Packers 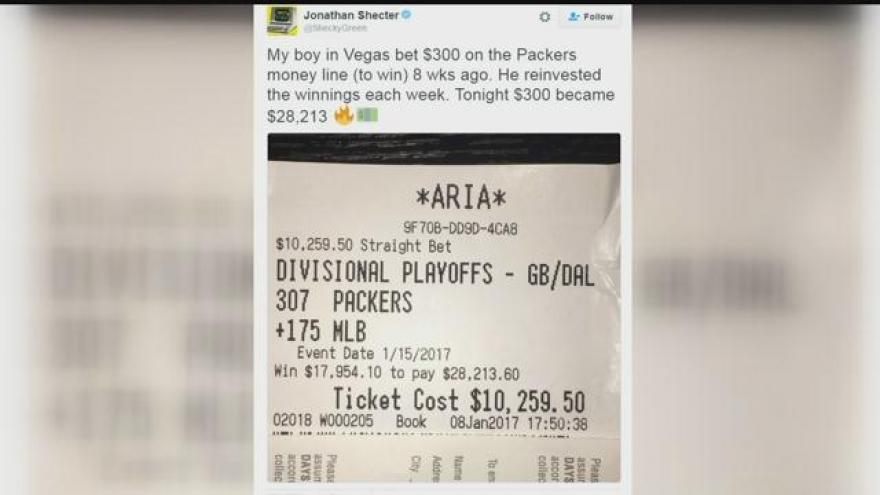 Two men, originally from New York, are betting big on the Packers.

Brian Yankelevitz and Russ Axelrod grew up in Queens, New York, and have been friends since childhood. They now live in Orlando and Vegas respectively. Both have a passion for football and gambling. Brian is Jets Fan. Russ is an Eagles fan. So, why the Packers? The pair says it started in November when the Packers were 4 and 6.

"We decided let’s find a team that has to win the rest of their games to make the playoffs, but also a team that was good enough that if they did, that could also go on and win the Super Bowl," said Yankelevitz.

The two say $300 quickly multiplied as the Packers kept winning. If the team continues their run, the two could win more than $76,000. If they don't, they lose it all.

"When you have #12 back there, anything is possible. He’s the best in the game, and the Packers have a lot of magic going for them right now. We’re going to ride ‘em out," said Axelrod. “We think any money bet on Rodgers is a sound investment.”

There's no point spread. The bet is solely on whether or not the Packers go to and win the Super Bowl.

“Sometimes you bet with your brain, not with your heart. Although right now we have a lot of our heart involved in this one,” said Yankelevitz.

If the bet works out, Yankelevitz and Axelrod have a chance at winning upwards of $125,000-$200,000 depending who the Packers play in the Super Bowl. The stakes are higher if they win against the Patriots.

If they do, they plan to donate some of the money to charity. Their goal is to get businesses on board to match at least part of the winnings.