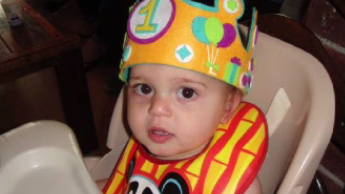 Racine - A Racine community is giving their support to help a young toddler beat the odds. They’re calling themselves Team Arlo. It’s in honor of 16-month-old Arlo Kristopeit who was diagnosed with a rare and aggressive form of liver cancer in December. It has now spread to his lungs, and Arlo needs a liver transplant. Before that can happen, doctors say that he has to go through chemotherapy in order to remove cancer out of his lungs.

On March 12th, his family hosted a benefit at the Route 20 Outhouse to help offset the medical costs. There was live music, raffles, drinks, and foods. There was also kid-friendly activities such as face painting, balloon animals, and crafts.

His father, Joshua Kristopeit, says the support is overwhelming, “It’s the saddest thing when you realize how many people are pulling for you because of something like this, but I’ve just cried out of the beauty so many times, it’s been awesome.”

Arlo is currently undergoing chemotherapy at Children’s Hospital. If you'd like to donate, his family has set up a CrowdRise campaign.