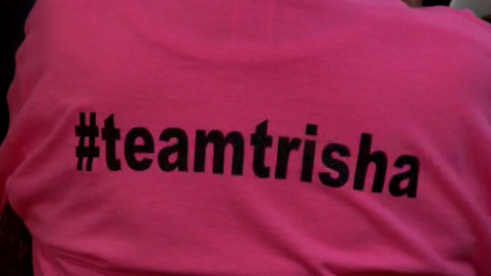 At just 30-years-old a young woman in Racine is battling a rare form of breast cancer. This weekend as her treatment continues a community shows its support by trying to raise enough money to pay for her hospital bills.

Trisha Micic is also a newlywed. She took her honeymoon last May and the diagnosis came in September. Her treatment continues even now. Music pounded through the Route 20 Outhouse and vibrated the plastic on dozens of gift bags raffled off in the fundraiser. Organizers wore pink shirts - they said #teamtrisha while Trisha herself wore a fuzzy black hat, one sign of her cancer journey.

"It's all for Trisha, helping her out," Trisha's father Tom McDonough said. "It for all the causes - breast cancer and everything else. And I wish this could happen for all the breast cancer patients out there right now."

But the community has latched on to Trisha's struggle 1.) because of her age and 2.) because of her personality - it's a happy one, attracting the help of dozens of people dividing up ways to help her as she's gone through chemo.

Sunday's event will raise money to pay for her cancer treatment which supporters say they hope will end soon and successfully.

"It's been unbelievable. The response and everybody that has come out has overwhelmed me," Trisha said.

Some positive and unexpected news was revealed during the benefit. Trisha and her husband announced that as of now, her treatment is complete and her latest MRI revealed that the cancer is gone.