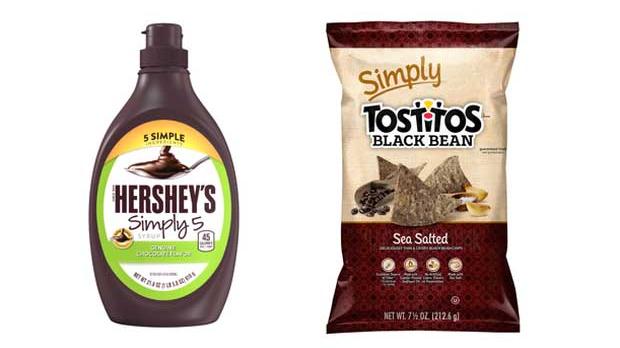 Earlier this year, The Hershey Company introduced "Simply 5" syrup, a five-ingredient version of its classic chocolate syrup. Tostitos has expanded its "Simply" line with a bag of chips that has only three ingredients. Bertolli frozen meals is also rolling out a pasta dish that eliminates several preservatives and enrichments.

So what's behind the trend?

"People are losing trust in the largest food companies, and they're very concerned about these massive ingredient lists on so many products," said Michael Moss, Pulitzer Prize-winning journalist and bestselling author of the book "Salt, Sugar, Fat."

But the catch is that it's not necessarily more healthful to eat these products.

The real question: "What's left in there? What's left in there typically is the salt, the sugar, the fat, the calories -- the real essence of so many of these products," Moss said. "So they're going to have less artificial flavorings, less colorings, less GMO, perhaps. But that's the real difficult thing for consumers, is knowing are these things really healthy?"

Ingredients with chemical sounding names often worry people, Moss said, "even though I'm not sure that that worry is well placed."

While food companies are listening to consumers, they will not sacrifice the taste to transform products.

"None of these companies are going to roll out a new product without subjecting it to massive taste tests. I mean, that's the bottom line for them: low costs, convenient and yummy," Moss said.

There's one thing Moss would like to see these companies do more of: add nutritious ingredients to their products.

"It's one thing to take the Hot Pocket down -- Nestlé for example reduced the salt, sugar, fat -- but can they stuff those Hot Pockets with the things that all of us should be eating more of? Broccoli, Brussels [sprouts] -- real vegetables. That's the real challenge for the processed food industry," he said.