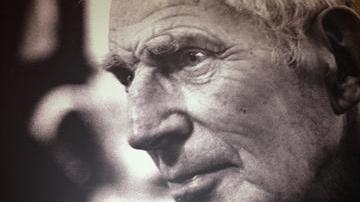 WAUWATOSA-Beckett: A Centenary Celebration is on display now through the end of January at the Milwaukee Irish Fest Center at 1532 N. Wauwatosa Avenue.

Probably best known for his stage play \"Waiting for Godot\" he was a man who also had a passion for music and painting and was steeped in European culture, writing in English and French.

He was also known to suffer from panic attacks, anxiety and depression and, according to Andrew Kincaid of UW Milwaukee, never gave interviews.

It has left many wondering what is the true meaning of his work.

\"Beckett never explained his work,\" Kincaid explained before speaking at the opening reception of the exhibit on Friday, December 13th.

\"You have to consider the influences, the places where he lives, to come away with the themes.\"

The exhibit was put together by the Irish Department of Foreign Affairs and seeks to do just that.

It's a self guided tour told in pictures and words and placed in order of life experience from the front entrance of the Irish Fest Center to its main ground floor auditorium in the back.

It allows you to go at your own pace. Perhaps, while taking in the beautiful Christmas decorations at the Center or visiting its music archives, or attending a show. On your way through, be sure to make a stop at the center's cozy bar.

Gleeson says while most cultural celebrations in the city revolve around St Patrick's Day and Irish Fest, exhibits such as this give insight and education to those wanting to learn more about Ireland.

\"We need to make available to Americans writers like Beckett,\" Gleeson told CBS 58 News. \"The more you go the more it might resonate.\"

\"Beckett may be the poster boy for the theater of the absurd,\" Kincaid explains,\" but for as serious and dark as he can be, he also offers compassion and friendship. I have a passion for Beckett because he speaks to me intellectually and personally.\"

Beckett had the unique ability to combine tragedy with humor. It makes his work challenging, but rewarding if you approach it with an open mind.

Visit as often as you like. The Beckett Exhibit is free. But it's only here in Milwaukee until the end of January when it moves on to Minnesota.