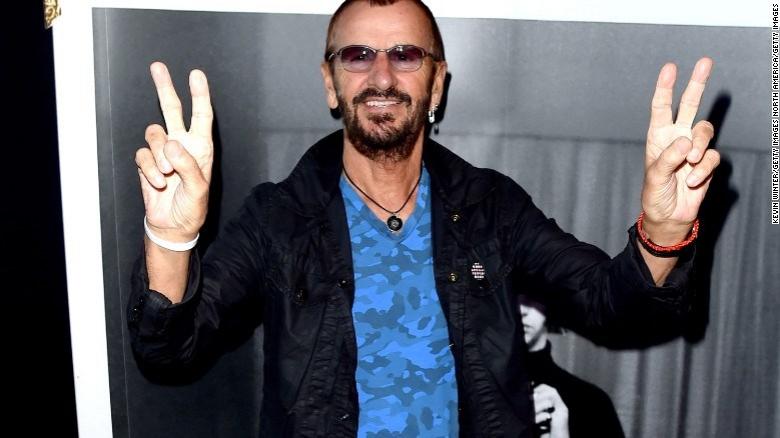 (CNN)Ringo Starr drummed up some major money by auctioning off his Beatles memorabilia this weekend.

The rock star drummer and former Beatle got more than $2 million from his 1963 Ludwig Oyster Black Pearl drum kit. His personal copy of the 1968 album "The Beatles," better known as the "White Album," fetched an additional $790,000.

It's the same drum kit he played during 200 concerts and on most of the band's earliest hits such as "Can't Buy Me Love," and "I Want to Hold your Hand," said Martin Nolan, executive director of Julien's Auctions.

Starr did his part to get potential buyers excited.

"Look at the size of it!" he said, sitting on the zebra striped set before the auction. "I wanted it to be small so it would make me look big," he joked.

Rolling Stone magazine identified the buyer as Indianapolis Colts owner Jim Irsay, who bid $2.25 million for the drums and also bought a Rickenbacker guitar gifted to Starr by John Lennon.

READ: John Lennon's "lost" acoustic guitar sells for $2.4 million.  In the interview, Irsay said he always dreamed of the band getting back together, and with his new purchases, he at least has an instrument from each of the Beatles in his collection.

"It took over $4 million and 45 years, but we finally got them back together," Irsay said in the interview. "I know it's a symbolic thing, but it really means a lot to me."

The copy of the "White Album" is stamped with the serial number A0000001, indicating it was the very first pressing of the disc that had such classics as "Dear Prudence," "Back in the U.S.S.R," and "Helter Skelter."

The copy of the record was kept in a bank vault for decades, but Starr said it was his own personal copy that he played over and over.

"We used to play the vinyl in those days," Starr told Rolling Stone. "We didn't think, we'll keep it for 50 years and it will be in pristine condition.' Whoever gets it, it will have my fingerprints on it."

In all, Starr netted $9.2 million from more than 1,300 pieces of memorabilia up for bid between him and his wife, Barbara Bach.