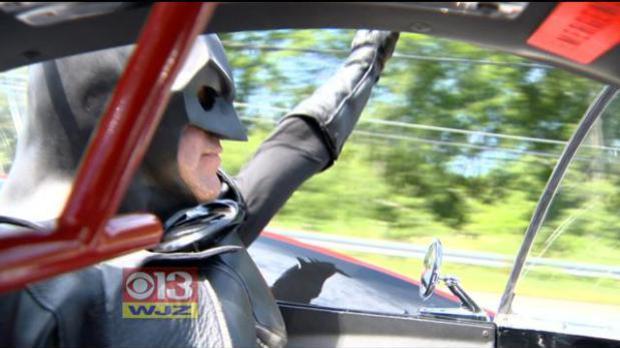 (CNN)Lenny B. Robinson, the Good Samaritan who visited children in hospitals dressed as Batman and entered the public spotlight after police pulled him over in costume, died Sunday after a car hit his custom Batmobile on a Maryland interstate.

His custom Lamborghini broke down while he was driving east on I-70 in the fast lane. He got out to check the engine while still in the lane, and a Toyota Camry struck his car, which in turn hit him, the statement said.

The Camry driver was not injured, the police statement said.

On top of the cost of his Batmobile and Caped Crusader suit, Robinson said, he spent tens of thousands of dollars each year on coloring books, sunglasses and other gifts for children he visited in hospitals across Washington and Maryland.

But he never wanted the story to be about him or his gadgets: \"It was about coming here for the kids,\" he said in 2012.

\"It's rewarding in a completely different way, just making that child smile. If I only touch one kid out of all this, then I know I've done really something really successful.\"

And yet, Robinson became a viral video sensation in March 2012 when police pulled him over in full costume on Route 29 in Silver Spring, Maryland. The dashboard camera in the Montgomery County police cruiser caught the entire scene, including the officer calling for back up.

\"You can send me Robin if you wish,\" the officer snickered to the dispatcher before asking the driver, \"What's your name other than Batman?\"

The police pulled over Robinson's car because instead of a Maryland license plate, he had the Batman logo. Robinson liked his outfit and car to look just right when he visited hospitals to cheer up terminally ill children.

Once police heard that and saw that the official license plate was inside the car, Robinson was on his way to both the hospital and Internet stardom. For months, whenever he showed up a at a hospital or charity event, cameras followed.

The benefits were clear to those who worked with Robinson.

\"Some of these kids recognize that this is not Batman, but in their head it is, and this is a great thing for them,\" Dr. Joseph M. Wiley said in 2012 during one of Robinson's visits to Baltimore's Sinai Hospital.

\"It is absolutely clear to those of us in the field that attitude and play therapy and distraction help children overcome illnesses, so this is a big deal for all the kids who are here today.\"

Robinson began volunteering full-time in 2007 after selling an industrial cleaning business he started in high school. The business -- which cleaned office buildings, churches and synagogues -- was fulfilling, but being Batman and cheering up sick children was his calling, he said.

\"You see what's going on. It has to be moving. Sometimes you're crying on the inside, but you're strong on the outside. These are the real superheroes. It's not me; it's not you. They're fighting for their lives every single day,\" he said.

\"Remember, at the end of the day, ask yourself, 'Self, did I make a difference?' And the answer had better be yes.\"