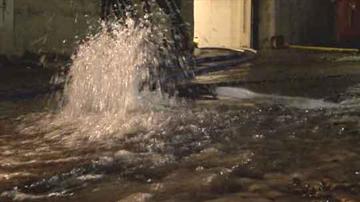 MILWAUKEE - More than three hundred We Energies customers lost power for several hours after a basement flood in a Third Ward building. Restoration crews say a cast iron pipe in a portion of the sprinkler system in the building burst sometime Sunday morning. Water flooded into the first floor of the building at the corner of Water Street and St. Paul. The water then seeped into the basement where cars were parked. Crews say the water was 3 to 4 feet deep in the basement. For some reason, that caused power to go out to customers up to 3 blocks away. The power was restored to almost everyone in about 4 hours, but crews continued pumping water out of the building late Sunday night. Those who lost power are grateful this didn't happen on a work day. Officials are still trying to figure out what caused the pipes to burst.