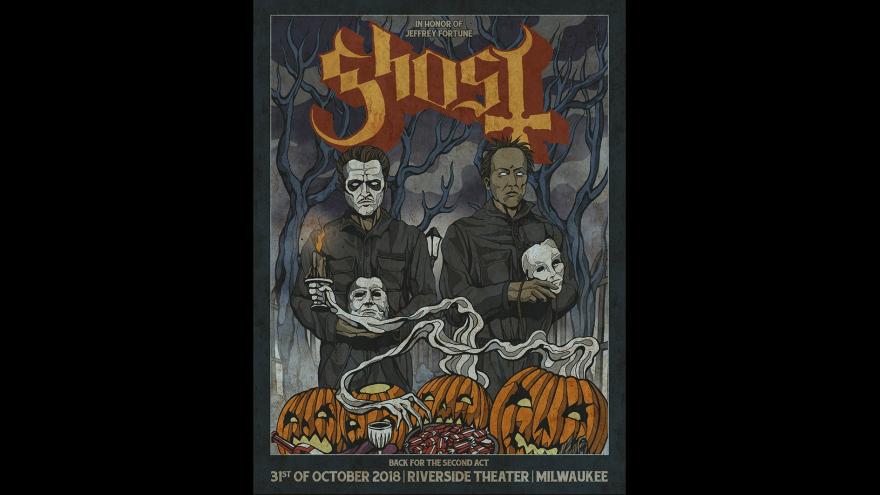 MILWAUKEE (CBS 58) -- Swedish rock/pop band GHOST will return to the Riverside Theater on October 31 to complete its concert that was cut short earlier this year after a fan died during an intermission.

The May 31 show was canceled at the close of Act I due to the tragic collapse and subsequent death of Ghost fan Jeff Fortune. Dedicating the October 31 performance to Mr. Fortune and his family and friends, Ghost will perform the hour-long Act II for ticket holders who attended the original date.

Doors open at 7:00 p.m. with Ghost taking the stage at 8:00 p.m. The show will start a bit early so guests can enjoy the previously-missed Act II of Ghost's concert and still have plenty of time to go trick-or-treat or party afterwards.

Exclusively for this performance, Ghost has created a special T-shirt that features the likenesses of Cardinal Copia and Jeffrey Fortune clad in Michael Meyers costumes. The T-shirt will be available at the venue’s merch tables, with all proceeds going to Mr. Fortune’s family.

All ticket holders will be contacted by the Pabst Theater Group with an invitation to RSVP for the show and must do so by September 30 to guarantee their ticket. No new tickets for this performance will be sold.