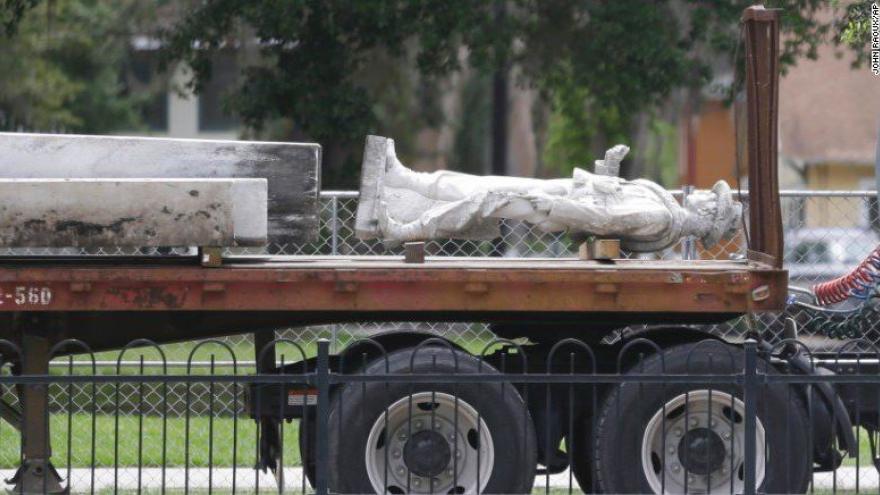 The removals come as cities and states are considering taking down Confederate monuments following the clashes at Saturday's rally in Charlottesville, Virginia, which left one anti-racism protester dead.

Statues in Lexington, Kentucky, are expected to be removed, while in Durham, North Carolina, a woman was arrested in the toppling of a Confederate statue during a protest Monday.

In New Orleans, the final Confederate statue in the city came down in May.

The memorials removed in Baltimore included the Roger B. Taney Monument, and a monument honoring Confederate Gens. Robert E. Lee and Thomas J. "Stonewall" Jackson, according to WBAL.

As chief justice, Taney wrote the Supreme Court's majority opinion in the infamous Dred Scott decision a few years before the Civil War. The 1857 ruling found that slaves were not citizens of the United States and therefore were not protected under the US Constitution.

The 13th and 14th amendments, which were adopted in 1865 and 1868, respectively, formally outlawed slavery and granted citizenship "to all persons born or naturalized in the United States," which included former slaves.

During the Civil War, Maryland was one of several border states and not part of the Confederacy. But it had split loyalties and was the scene of many battles. In April 1861, a bloody riot broke outin Baltimore, leaving at least a dozen people, including soldiers called to federal service, dead.

The Southern Poverty Law Center last year cataloged 718 Confederate monuments and statues. It said about 300 of them are in Georgia, Virginia and North Carolina.