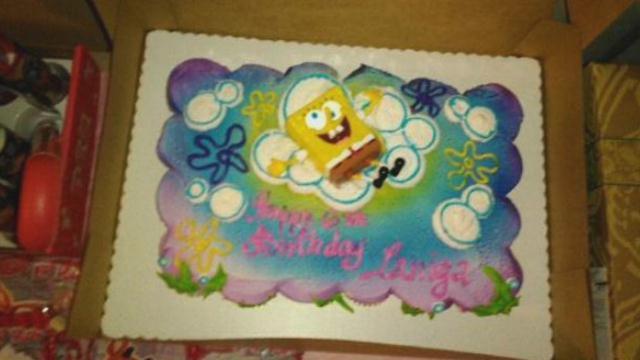 CLEVELAND, OH (WOIO) - At first glance, one of two cakes ordered for a little girl's birthday party did have a racial slur written on it.

Was it intentional? That's the question the family and Cleveland 19had.

Ronell Tucker is 6-year-old LaMiya Tucker's grandmother. She was upset about the misspelled name.

"That was not right at all and it really upset a lot of people at her party and her," said Ronell Tucker.

Tucker ordered two cakes over the phone from Dave's Super Market on Lakeshore Blvd in Euclid. One cake came out just fine but a second cake had a major misspelling on it.

Instead of LaMiya, it spelled 'LaNiga' a variation of the N-word.

"I was very upset and angry and it felt like racism to me cause how do you get one cake wrong and one cake right. You had to notice the mistake," said Ashely Hayes.

LaMiya's mom, Ashely Hayes, noticed the mistake as she was taking pictures at the party. She started crying. She was upset.

"All the other kids knew the words and they were like ooh they put that on her cake," added Ashley. "We were all like in shock."

They called the store and things escalated.

I called the man who runs Dave's, Burt Saltzman, and he got busy finding out what happened and why.

Ronell Tucker and Saltzman looked at the paperwork and discussed the possibilities.

Saltzman said, "I do have to apologize because I do think the fellow, the manager who handled it, could have handled it in a better manner. We'll work it out and leave it as is, worked out and everything is cool."

Apology accepted and little LaMiya's family is satisfied with the way things worked out.

Give Burt Saltzman of Dave's credit for not ducking the issue and the family credit for being willing to accept a mistake. As the saying goes, all's well that ends well.