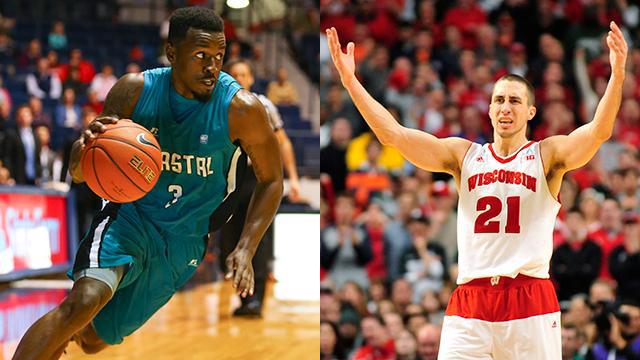 The Wisconsin Badgers beat the Coastal Carolina Chanticleers 86 to 72 in their first game of the NCAA 2015 Tournament.

It was his 12th double-double of the season.

Wisconsin, a number one seed for the first time in school history, is picked by many as one of the favorites to reach the Final Four in Indianapolis. With the country's most efficient offense, excellent size in the post, and a defense that can clamp down on opponents for minutes at a time, the Badgers rolled to the outright Big Ten regular season title and followed that up with a Big Ten tournament championship last week in Chicago.

The Badgers are led by Big Ten Player of the Year Frank Kaminsky, who's averaging over 18 points and 8 rebounds a game. Point guard Traevon Jackson is not expected to play as he continues his recovery from a broken right foot. Earlier this week, head coach Bo Ryan said there is a chance Jackson could return if the Badgers make a run past this weekend.

16th seeded Coastal Carolina failed to  make history and be the first 16 to take down a 1 in the tournament's history. The Chanticleers (24-9) won the Big South tournament played on their campus, and gave top-seeded Virginia a challenge last year before falling to the Cavaliers.