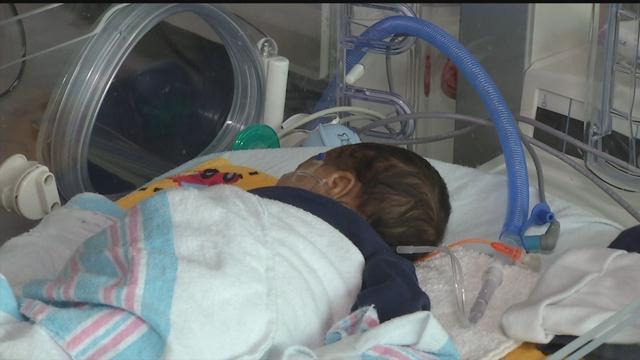 Babies born addicted: their numbers are going up; one study says by as much as 125 percent in the past five years. But hold on: their mothers aren't addicts.

They're drugs meant to make you feel better, like percocet and vicoden.

And they're taken for good reasons, like for a car accident that caused chronic hip or low back pain but they're now causing babies to be born addicted.

Its been happening since Dr. Jeffery Garland started practicing nearly 25 years ago.

But whats different now is its taking everyday moms by surprise.

These women, on a daily dose of opioid pain medication, taking a prescribed dose and being managed by their doctors; Dr. Garland says these are the women having babies born addicted.

"We watch all those kids of moms that are on those pain meds. We've had kids where moms have been on it for a couple weeks, 2-3 weeks. And we end up watching those kids to make sure they don't develop symptoms of neonatal abstinence syndrome.

Some not even aware until the baby shows symptoms after being born. They're babies that are more likely to be full term and end up having a nearly three week hospital stay.

"Some babies are so severe they can't coordinate suck swallow so they have to be tube fed," said Dr. Garland.

Garland says this all started 15 years ago, when hospitals started to get more aggressive with pain management.

But he says doctors need to warn their patients how dangerous it is to take pain medications while pregnant.

"A lot of its prescribed. Some of its 'I got this from my neighbor, she had pain and gave it to me,'" he said.

And the problem reaches far.

"It's everywhere. It's here in suburbs, everywhere," he said.

Its become so common Aurora hospitals have come up with a new standard to care for these babies, used across the state of Wisconsin. It's one  that not only weans them off the opioid but uses constant touch as a way to calm the babies," he said.

Its reduced the baby's stay in the hospital by almost a week.

"We have to treat mom and baby together and throw the judgment out of the window," Dr. Garland said.

However, Garland says the prognosis is usually good for babies born addicted.

"The baby's prognosis is as good as their siblings who is not on medication," he said.

But hopes with more awareness they can catch the problem in its early stages before  the babies are even born.

"We're doing a great job on our end to get the babies out and home with mom as soon as possible. But we can only do so much," he said.