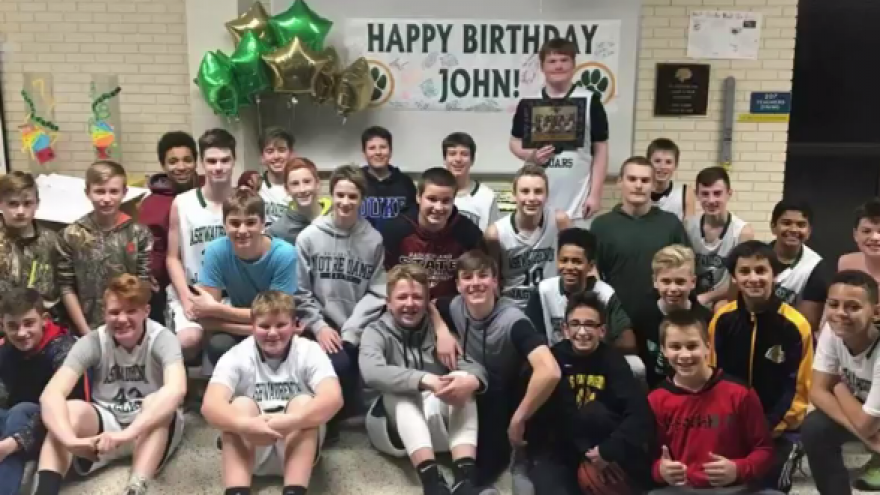 ASHWAUBENON, Wis. -- (WFRV) On Thursday, the Parkview Middle School eighth grade boys basketball team played their last home game, which they won, and their Most Valuable Player was a teen who has had an impact on the team's lives.

John Marshall, 14, has autism, and is in eighth grade at Parkview Middle School.

He showed interest in wanting to play basketball, and he already had some friends on the team, who are also his mentors.

"I joined because my friends...Matt and Chris helped me in this program called peer mentor," John said.

John's mother explained that John had missed out on some experiences until he joined the team, like never having a big birthday party with his peers.

Last week, the team helped pull of a surprise birthday party for John.

"He's just thrived at this school, and the kids have always embraced him and accepted him," Jennifer Marshall, John's mother, said. "They don't have pity on him, they push him when he's down, if he wants to have a lazy day, they're like, 'No John, you can do it."

The friendships continue long after the last buzzer goes off.

"I just think that John is an amazing person he is definitely a good basketball player. He's also taught a lot of us how to be good human beings in general," Kendal Janquart, a player on the team, said.

John was given his #53 jersey to keep after the last home game, as well as the MVP award.

John says he is going to play football when he heads to high school next fall.