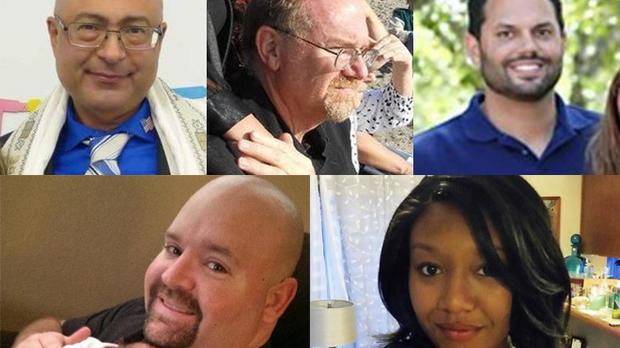 On Thursday evening, the San Bernardino Coroner's Office released a full list of the names of the deceased victims.

Nicholas Thalasinos leaves behind a widow, Jennifer, an elementary school teacher. Jennifer sat down with CBS News' John Blackstone to talk about her husband.

"He was so kind to everyone," she said. "Just my whole life has been turned upside down. He just had an enormous heart."

Thalasinos was a Messianic Jew and passionately defended Israel, actively debating about religion in online forums and in person, his friends said. Only two weeks ago, Thalasinos was having a heated on-the-job discussion about the nature of Islam with Syed Rizwan Farook, his fellow restaurant inspector and the man police identified as the shooter.

Thalasinos' friend, Kuuleme Stephens, said she happened to call him while he was working with Farook, and that he brought her into their debate, loudly declaring that Farook "doesn't agree that Islam is not a peaceful religion." Farook countered that Americans don't understand Islam, and Thalasinos responded by saying "I don't know how to talk with him," she said.

Stephens said she didn't sense any pending violence at the time, and it is not clear if their debates factored in the attack. Stephens said Thalasinos did not believe his co-worker would ever turn violent. However, Jennifer said "she believes her husband was martyred for his faith and beliefs," Stephens said.

Nicholas and Jennifer had recently renewed their marriage vows, and they appeared together frequently on his Facebook page.

"He was a wonderful person," said Joey Shimoni, another friend. "A great husband and just a sweet soul."

"Michael was the most amazing person," Renee Wetzel said in a statement, issued through her friend Celia Behar. The couple had five children from previous marriages and one child together.

"He was my best friend and an incredible father who was loved by all. I have never known a better person. He loved his work and his family so very much. Without him, this family will never be the same. We appreciate all the love and support that everyone is showing."

Behar runs a blog for mothers where Renee Wetzel frequently posted, and she turned there to ask for prayers shortly after learning that her 37-year-old husband, an environmental health supervisor, could have been attacked. "My husband was in a meeting and a shooter came in. There are multiple people dead/shot. I can't get a hold of him," she wrote.

After last month's deadly shootings in Paris, she posted a vacation photo on Facebook, overlain by the colors of the French flag.

After her husband's death was confirmed, she posted a Bible passage: "When my heart is overwhelmed lead me to the rock that is higher than I."

The Lil' Mamas blog set up an online fundraiser for the Wetzel family on Thursday morning and quickly raised donations of more than $60,000.

Church of the Woods also asked its members to pray for the extended family: "Please continue to pray for Renee, his children, and his former wife Amy as they process this terrible tragedy and loss of their husband and father," the church said in a statement.

Yvette Velasco, 27, of Fontana was one of the youngest victims of the shooting. Her family released a statement describing her as intelligent and motivated.

"Yvette was an intelligent, motivated, and beautiful young woman, who was full of life and loved by all who knew her. We are devastated about what happened, and are still processing this nightmare," the statement read. "We ask that you please respect our family's privacy in order to grieve our loss. Yvette is survived by her parents, Robert and Marie Velasco, and her three sisters, Adriana, Erica, and Genevieve. Please pray for our family and the other families who have lost a loved one as a result of this terrible tragedy."

Damian Meins, 58, was passionate about serving his community, a message he took from the priests at his Catholic high school in Riverside and carried throughout his life.

Meins never strayed far from his church or its teachings, said Walter Hackett, who met Meins some 40-years ago in high school. "Service to others, helping others. He very much took that to heart," said Hackett.

"Damian was a good, good guy. Funny and smart and tall. A real quick smile, very friendly and outgoing," Hackett said. "It's a real hard hit for all of us who knew him."

Meins married his high school sweetheart, now a Catholic school principal, and they raised two daughters, one a teacher. Meins was fondly remembered as the guy who dressed up as Santa for school pictures, according to a parent's social media posting Thursday.

Meins' Facebook page, where he can be seen smiling with his family in front of the Golden Gate Bridge in San Francisco, says he studied business administration at the University of Redlands starting in 1991. In 1979, he graduated from UC Riverside. He was also retired from the County of Riverside after working there for 28 years.

In addition to working at the in the public health department in San Bernardino, Meins was an Extended Care Coordinator at St. Catherine of Alexandria School in Riverside, where he also helped kids create Christmas art projects and religious murals, Hackett said.

Meins received a Community Recognition Award for his work in Riverside, which was based on "compassion, courage, forgiveness, generosity, humility, inclusiveness, integrity, kindness, respect and service."

According to the Press-Enterprise, he was the first victim identified. A living Rosary for the Meins family was held Thursday.