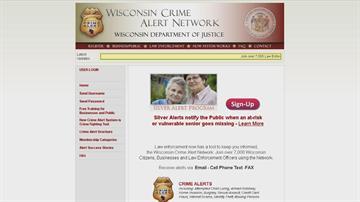 Similar to an Amber Alert, Silver Alerts go out by email, text message, or fax through the Wisconsin Crime Alert Network to notify the public that an adult with Alzheimer’s, dementia, or other permanent cognitive impairment is missing.

On September 19, 2014 a Silver Alert was issued around 6 pm for 84-year-old Patrick Looby who was reported missing after leaving a restaurant in Brookfield.

The Silver Alert was sent to broadcasters, the public, law enforcement, the Department of Transportation Dynamic Messaging Signs, digital billboards and to Wisconsin Lottery display terminals.

Looby was found hours later in Big Bend after a clerk at a grocery store noticed the alert on the lottery machine.

Silver Alerts will be issued when the following criteria are met:

• The missing person is 60 years of age or older;

• The missing person is believed to have Alzheimer’s, dementia, or another permanent cognitive impairment that poses a threat to the individual’s health and safety;

• There is reasonable belief that the missing person’s disappearance is due to the individual’s impaired cognitive condition;

• The Silver Alert request is made within 72 hours of the individual’s disappearance;

• There is sufficient information available to disseminate to the public that could assist in locating the missing person.

As Alzheimer’s and dementia are not limited to those 60 and older, where individuals are missing and at risk but do not meet the criteria for a Silver Alert, the Wisconsin Crime Alert Network (WCAN) can be utilized to send out a Missing/Endangered alert.

The public and businesses are encouraged to sign up to receive Silver Alerts and Crime Alerts at no cost by going to www.wisconsincrimealert.gov.

As of Thursday September 25, 2014, two Silver Alerts remain in effect:

Mr. Robert Osborn was last seen the evening of September 17, 2014, in Oak Creek.

Ms. Nejay Redd was last seen the evening of September 15, 2014, on Madison’s east side.  She is believed to have walked away from her home.

Anyone with information should contact Oak Creek and Madison Police Departments.