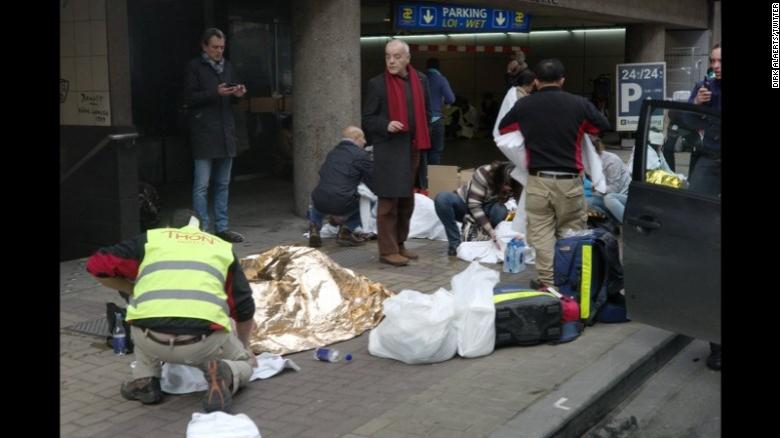 MORE COVERAGE AT THIS LINK

A Belgian security official says the death toll has risen to 34 in attacks on the Brussels airport and a subway station.

The official did not specify how many people were killed and wounded at each site. The official spoke on condition of anonymity because precise numbers were expected to be announced early Wednesday.

Earlier, the government had reported 20 dead at the Maelbeek metro station, in the heart of the European Union's capital, and 11 dead at the airport, and scores of injured.

The Islamic State group claimed responsibility for the attacks.

An Iraqi intelligence official says sources in the Syrian city of Raqqa have told them that the Islamic State group has been planning terrorist attacks in Europe for two months which would "target airports and train stations."

The official tells The Associated Press on Tuesday that Iraqi officials told European countries about the plans "but Brussels was not part of the plans" at the time.

He says IS militants changed the operation and moved it to Brussels "because of the detention of Salah Abdeslam" — the Paris attacks suspect arrested Friday in Brussels.

Another senior Iraqi intelligence official said "Daesh (IS) was behind this operation and it was planned in Raqqa two months ago and there are three suicide attackers who will carry out another attack."

The officials spoke on condition of anonymity since the investigation was ongoing.

UPDATE: (AP) People can start moving around Brussels once more after being told to stay in place for hours after bombing attacks Tuesday morning at the airport and on a subway station.

Peter Mertens of the Belgian crisis center says "the threat is still real and serious" of more attacks.

But he says air traffic at Brussels' Zaventem airport "remains closed for the day under any circumstance" but people in the Belgian capital can start walking outside again and train stations are reopening.

At least 31 people were killed and nearly 190 wounded Tuesday after bombs went off in Brussels airport.

Florence Muls, the Brussels airport communications manager, is defending the security at the airport.

She tells The Associated Press that the terminal zone is open. That means there are no checks on luggage or passengers at the entry to the terminal — and European rules do not require closing it off.

She says the airport is does not have the ability or the mandate to impose controls at the airport terminal entry.

The Church of Jesus Christ of Latter-day Saints issued a statement Tuesday identifying them as 66-year-old Richard Norby of Lehi, 20-year-old Joseph Empey of Santa Clara and 19-year-old Mason Wells of Sandy.

American on Brussels subway explosion: "Everyone dropped to the floor"

They were near the explosion when it occurred and have been hospitalized.

The three men were serving in Paris and were at the airport with a fourth missionary who was on her way to an assignment in Ohio.

The U.S. Embassy in Brussels is recommending that Americans in Belgium stay where they are and avoid public transportation. The embassy noted Tuesday that with the threat rating in Brussels at its highest alert, attacks can take place with little or no notice. It urged U.S. citizens to monitor media reports, follow instructions from the authorities, and "take the appropriate steps to bolster your personal security."

ORIGINAL: Brussels, Belgium (CNN) Three explosions that ripped through the Belgian capital of Brussels on Tuesday killed at least 34 people and wounded about 170 more, according to Belgian media, and raised the reality of terror once again in the heart of Europe.

After the blasts -- which came days after the capture of Europe's most wanted man, Salah Abdeslam, in a bloody police raid -- Belgian authorities again hit the streets looking for those tied to Tuesday's carnage and who might launch more attacks.

At least one of the two airport explosions was a suicide bombing, Van Leeuw said. A blast happened there outside the security checkpoints for ticketed passengers and near the airline check-in counters, an airline official briefed on the situation said.The subway station blast happened in the Brussels district of Maalbeek, near the European quarter, where much of the European Union is based.

Richard Medic, who arrived at the station shortly after that explosion, wasn't surprised by the carnage after all that Europe has gone through recently, including the November's massacre in Paris that ISIS claimed responsibility for.

"I think, after the Paris attacks, we were assuming like this would happen," the Brussels resident told CNN. "And it was a matter of time."

Yet Jef Versele, who was in the airport's departure hall when the blasts occurred, said that he thinks Belgians should not hole themselves up and instead should continue to travel "to prove that we're not afraid of those who have done (the attacks)."

That doesn't mean being in the middle of it all, though, isn't frightening.

"You cannot believe it; you cannot believe it," Versele told CNN. "It was so insane. Not in my backyard."Belgian authorities bolstered security after Tuesday's attacks, including shutting down all Brussels metro stations and evacuating the city's airport.

This comes as the terror threat level in Belgium went up four -- its highest. That step-up means that army soldiers can be sent onto the streets to meet security needs.

In addition to the airport, Belgium's Royal Palace was evacuated after the attacks. And broadcaster RTBF reported the National Pensions Office in Brussels had also been cleared after two suspicious packages were found inside.

The ramifications were felt outside the Belgian capital as well.

As far away as the United States, authorities in places like New York, Washington, Chicago and Los Angeles took special precautions like increased K9 sweeps of subways and additional police patrols. This was especially true around airports, subway stops and train stations, with scenes like those in the U.S. capital -- where police pulled out and checked travelers at random -- not uncommon.

Similar, if not more intense measures were enacted around Europe.

Eurostar, a high-speed railway that goes to England and France, noted a number of schedule and other changes, including canceling service between London and Brussels.NATO, the military alliance that is headquartered in Brussels, increased its own alert level and expressed solidarity with Belgium.

"This is a cowardly attack, an attack on our values and on our open societies," NATO Secretary General Jens Stoltenberg said in a statement. "Terrorism will not defeat democracy and take away our freedoms."

British police have increased their presence at certain locations, including transport hubs like London's Heathrow and Gatwick airports, according to Scotland Yard.And France deployed 1,600 more police around the country, according to French Interior Minister Bernard Cazeneuve.

"I express my entire solidarity with the Belgian people," French President Francois Hollande tweeted. "Through the Brussels attacks, the whole of Europe has been hit."

That sentiment was echoed by Belgium's Michel during what he called "a dark time for our country."

"More than ever, I call on everybody to show calm, but also solidarity," the Prime Minister said. "We are facing a difficult, challenging time. And we should face up to this challenge by being united."The darkness set in not long after the sun rose in Brussels. Anthony Barrett said he heard something about 8 a.m. local time from his hotel across from the terminal building.

"When I opened the curtains and looked out, I could see people fleeing," he told CNN.

Barrett saw stretcher after stretcher carrying people out of the airport, with luggage trollies also used to transport the wounded.

In the airport's departure hall, Versele noticed "people ... shouting and running around" after the first blast, then even more pandemonium after the second explosion, which was, "in my eyes, much more powerful."That blast blew out windows, created a lot of smoke and caused parts of the ceiling to fall, he added.

"People were on the floor," Versele said, estimating he saw 50 to 60 people on the floor seemingly unable to walk. "... It was quite a mess."

Traveler Jeffrey Edison had cleared security and was out by the gate, several hundred yards from the departure lounge, where the explosions occurred. He told CNN he didn't hear the blasts but "suddenly saw" 200 to 300 people rushing toward him from the security checkpoint.

He says it took authorities around 25 minutes to tell the passengers what had happened, before evacuating the area and leading the passengers to the runways.About an hour later, during the tail end of Brussels' rush hour, another blast went off at the Maalbeek metro station.Sander Verniers was heading toward there when this explosion occurred, producing "strong winds going (through his train) and some noises that shouldn't be there." Belgian troops met the passengers as they got off the train and walked along the tracks.

"We all had to get out," Verniers told CNN. "There was a lot of smoke."The Belgian crisis center tweeted that all public transportation in the city has been closed.

"Stay where you are," it said.

Kristalina Georgieva, the vice president of the European Commission, said that all the organization's institutions are at "alert level orange" and that all meetings on its premises and outside have been canceled.

She advised people to stay at home or indoors.

"I am shocked and concerned by the events in Brussels," British Prime Minister David Cameron tweeted. "We will do everything we can to help."Abdeslam, who authorities say was involved in the Paris terror attacks last year, was arrested in the Brussels suburb of Molenbeek on Friday.

Belgium's Prime Minister deflected a question about whether there's any link between Tuesday's bloodshed and Abdeslam's capture, saying it is too early to tell.

He said Tuesday that he had "no information" about who was responsible for the attack, adding that authorities will find that out, but right now their focus is on caring for the victims.

Belgian national soccer team captain Vincent Kompany tweeted that he was "horrified and revolted (that) innocent people (are) paying the price again," but he urged people not to encourage those wishing to lash out.

"We must reject hate and its preachers," Kompany said. "... I wish for Brussels to act with dignity."