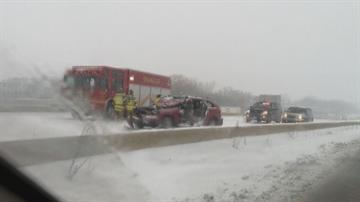 SOUTHEASTERN WISCONSIN-- At least three people have died and many more injured after multiple accidents and pileups across southeastern Wisconsin.

The snow caused slippery and dangerous road conditions prompting many law enforcement and traffic officials to advise travelers to stay off the roads. Many stretches and highways and interstates had to be closed.

One person was died in a rollover crash on I43 at Highway 100 said that the Milwaukee County Sheriff's office. Dodge County officials also reported one fatality in the Town of Trenton after a semi trailer and a car collided. A third person died in a crash on I-94 just south of 2 mile road in the Town of Yorkville.

Wheaton Franciscan said that their All Saints location in Racine has seen 27 patients from crashes and their Milwaukee locations has seen 12.

18 patients were sent to Froedtert Hospital. Six of those people are in critical condition.

The Wisconsin Department of transportation said that if you have to be on the roads allow extra time for travel, be sure your headlights are on ,and increase your following distance.