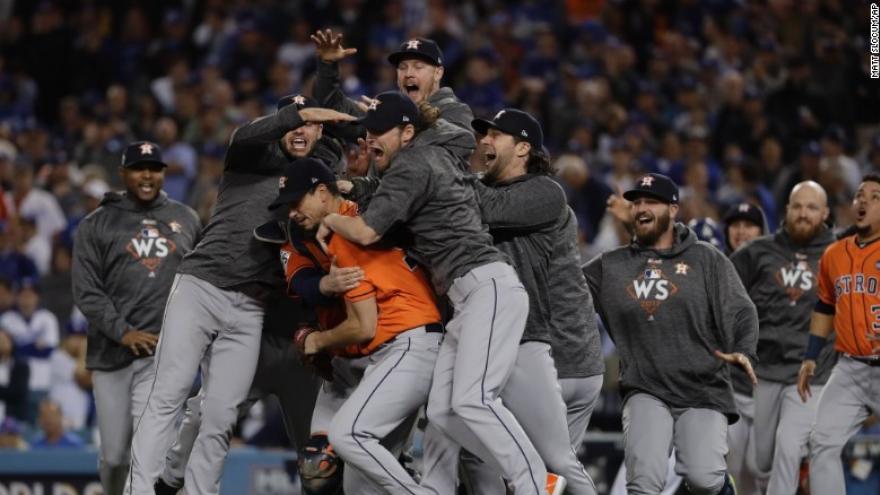 (CNN) In one of the most evenly matched, hard-fought and thrilling World Series of all time, it's fitting that fans were treated to a winner-takes-all Game 7.

In the end, it's Houston that gets to celebrate.

The Astros -- whose first season was in 1962 -- are World Series champions for the first time in franchise history, defeating the Dodgers 5-1 in Game 7 at Dodger Stadium in Los Angeles and completing a Fall Classic for the ages.

"You know what, Houston?" Astros manager A.J. Hinch said in an interview on the FOX broadcast. "You're a championship city."

Houston hit Dodgers starter Yu Darvish hard for the second time this series, leading again to an early exit after 1 2/3 innings -- tying Game 3 as the shortest outing of his career.

Kershaw, the Dodgers' ace, came into the game in the third inning and threw four shutout innings.

The damage in Game 7 included a two-run home run by outfielder George Springer to make it 5-0 in the top of the second inning. It was Springer's fifth home run this series, tying him for the most in a single Fall Classic with Reggie Jackson in 1977 and Chase Utley in 2009. He also became the first player to homer in four consecutive games in the same World Series.

Springer, unanimously voted the Willie Mays World Series MVP, referenced the inspiration of the Astros' fan base that is recovering from Hurricane Harvey.

"That patch on our chest truly does mean a lot to us," Springer said. "I'm so happy for all of our fans, who have endured a lot. We're coming home champions."

Perhaps it was destiny. In 2014, Sports Illustrated released a story with Springer on the cover of the magazine, predicting the Astros would be 2017 World Series champs.

"You make the happiest man in the world," shortstop Carlos Correa said to his girlfriend. "Will you marry me?"

This arguably has been one of the most entertaining World Series in history. It was the first Fall Classic since 1970 between two teams with at least 100 wins during the regular season, as Los Angeles won 104 games and Houston won 101.

These seven games were full of power -- Houston and Los Angeles set the record for most home runs in a single World Series -- and dramatic comebacks. Game 5 was the craziest of all, ending with a 13-12 Astros walk-off win in the 10th inning.

The Dodgers last won the Fall Classic in 1988 and were aiming for a seventh championship.