Arrests made in 2012 attack on Malala Yousafzai 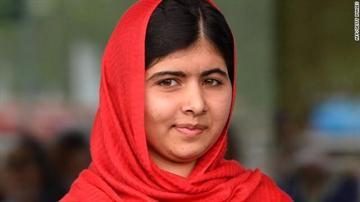 An outspoken supporter of a girl's right to an education in Pakistan, Malala was despised by Taliban militants who opposed her assertive initiative because they didn't want girls to go to school. In October 2012, an Islamist militant shot Malala, then 15, in the head as she was traveling home on a school bus.

She survived after emergency surgery in Pakistan and further treatment in Birmingham, England. The attack left two others injured.

Her bravery and determination generated support for her ordeal and knowledge about the plight of girls across the world who can't get a formal education.

Authorities in Pakistan said the people involved in the attack were linked to the Pakistan Taliban and were taking orders from its leader, Mullah Fazlullah.

The suspects were arrested in Swat, a district of Khyber Pakhtunkhwa province, army spokesman Maj. Gen. Asim Bajwa said. Malala, now 17, was born in the Swat city of Mingora.

Speaking at a press conference in Rawalpindi, Bajwa said that after an initial arrest \"we were able to track down the entire gang,\" known as Shura. All of them are residents of Malakand, also a district in Khyber Pakhtunkhwa.

An activist for years

Malala's activism began in the Swat region in 2009. Despite Taliban threats and pronouncements, she kept going to school and speaking out for education, and she wrote an anonymous blog for the BBC about her harrowing experiences. The Taliban came by on house raids, and she had to hide her books.

She received national and international honors for her efforts.

But, according to the Malala Fund website, \"her increased profile and strident criticism of the Taliban caused Taliban leaders to meet, and in 2012 they voted to kill her.\"

The Taliban, which claimed responsibility for the assault, said Malala was \"a symbol of the infidels and obscenity.\" But the Malala Fund noted that other Muslim clerics in Pakistan \"issued a fatwa against the Taliban leaders and said there was no religious justification for shooting a schoolgirl.\"

The organization supports projects in Pakistan, Kenya, Jordan, and Nigeria.

This summer, Malala visited Nigeria and appealed to Boko Haram militants in Nigeria to lay down their weapons and \"stop misusing the name of Islam.\"

Boko Haram, the name of which roughly translates as \"Western education is a sin\" in the local Hausa language, is trying to impose Sharia law across Nigeria and especially opposes the education of women.

She made the trip in support of an estimated 276 girls kidnapped in April by Boko Haram from their school in Chibok in northeastern Nigeria.