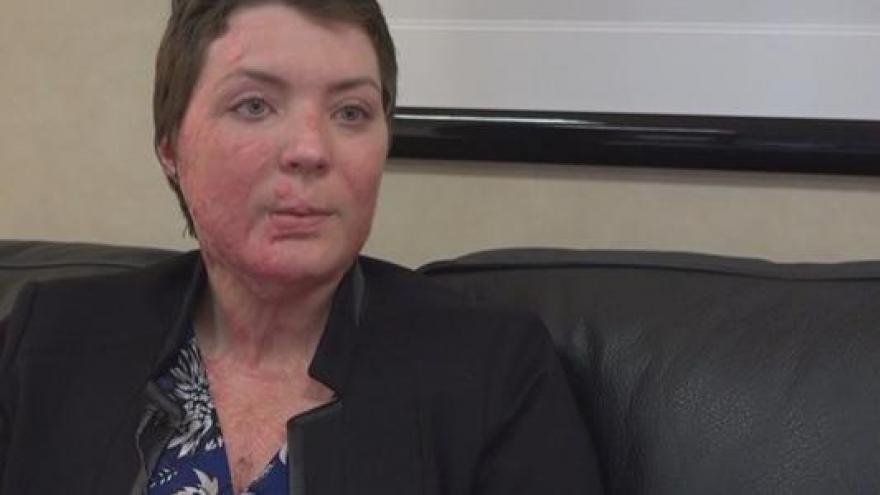 (KENS 5) In September, First Lieutenant Katie Ann Blanchard, a nurse in the Army serving at Ft. Leavenworth in Kansas, was set on fire and attacked by a colleague. Almost 20 percent of her body was severely burned, including her entire face and ears, and parts of her arm and chest.

The army sent her to San Antonio to be treated at SAMMC's burn victim unit where she's had countless surgeries and been heavily medicated. She's also been meeting with behavioral health physicians who have been helping her with the PTSD she has experienced since the attack.

"I was in so much pain that I felt almost like I just couldn't even move, it was so bad. Now I can wake up and get out of bed and move a little bit and I don't feel like crying," she said.

Because of the medication she's taking, she still can't drive and has to have a nanny help her take care of her three young kids: 2-year-old Finn, 1-year-old Arthur, and 6-year-old Canaan.

Blanchard has been in the Army for three years and served in Washington prior to her time at Ft. Leavenworth. That's where she met her husband, Major Troy Hokanson. They say that the attack and her journey in recovery has caused a strain on the family, but they have stuck together.

Blanchard hopes to continue her career in nursing after she recovers more and has been inspired by the nurses she’s met at SAMMC to work with burn victims one day.

Blanchard has received love, support and prayers from around the world. Her sister has started a Facebook page chronicling her recovery called Smiles for Katie Ann.

Her friends have also started a GoFundMe page that has raised more than $50,000 to help pay for expenses she’ll need during and after her treatment.

Blanchard says that her family is so touched and humbled by the well wishes.

"I love when kids write to me, and that just really touches me when they call me their hero. I just really break down," she said.

On Saturday, January 21, there will be a fundraiser for Katie at Vanadium Crossfit at 13126 A Lookout Ridge in San Antonio from 10 a.m. to 12 p.m. Those who wish to compete in the competition can pay $15. All other donations are welcome.