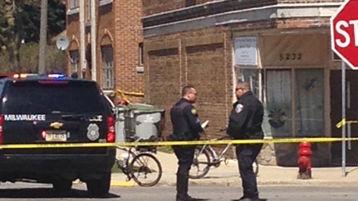 A fatal accident occurred on 53rd Street and Center Street after an attempted armed robbery. The responding officer's squad was involved in a separate accident at the crash, according to a statement from the Milwaukee Police Department.

The accident that took place around 11:30 am.

A witness told CBS 58's Lila Carrera said the accident involved a police chase. The witness said the driver was going fast and crashed into another car killing the someone in the other car.

Milwaukee Police were called to an armed robbery at the US Bank at 5220 W. North Avenue. A 25-year old Milwaukee man reported to a teller that he was being robbed by an armed suspect in the parking lot. The suspect, a 22-year old Milwaukee man, fled from the robbery in a 1998 Chevy Malibu northbound on N. 53rd Street to W. Center Street.

MPD followed the Chevy Malibu's path to the Malibu's crash with a 54-year old Milwaukee man driving a 1997 Mercury Cougar. The 54-year old died on the scene because of his injuries.

The officer's northbound squad was struck at the accident scene by a 2004 Hyundai Santa Fe that was eastbound on North Avenue. The officer was taken to a local hospital for treatment of non-life threatening injures, as was the 35-year-old woman driving the Santa Fe.

After the crash, the suspect ran into a nearby apartment building where he was arrested by responding officers.