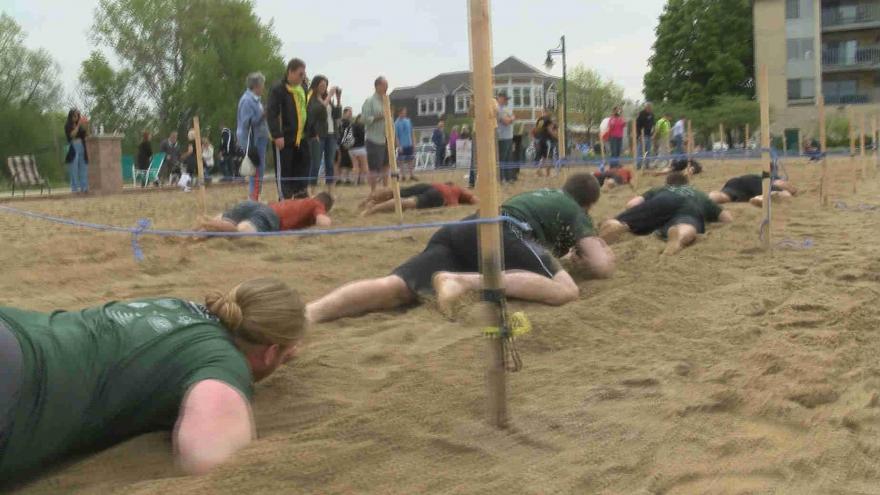 Watching them crawl, lift and paddle their way around obstacles, Bill Anderson might just look like a spectator. But the Marine Corps veteran knows better.

"This is not an easy course," Anderson said at Pewaukee Lake beach Saturday morning.

Anderson designed the annual Armed Forces Challenge himself, putting members of all military branches, as well as police and firefighters, through six courses.

"You've got a bunch of kids coming back from Iraq and Afghanistan," Anderson said. "It's nice to know that we old folks are still taking care of them. Like we said, we've always got their back."

In it's third year, the Armed Forces Challenge has grown from just five teams to more than 20.

"This is our way to say, 'Thumbs up, guys. Ladies, thanks,'" competition committee member Dwayne Mosley said.

Mosley says the challenge raised more than $9,000 last year, a number he expects to easily surpass.

"We take the funds, 100 percent of the donations go to the targeted charities so they can use the monies as they need," Mosley said.

This year, that charity is Fisher House Wisconsin - a $6 million "home away from home" being built largely thanks to donations on the Milwaukee VA Medical Center grounds. When complete, families of veterans getting treatment can stay in the home for free.

"It's just been amazing what Wisconsin's community has done to help build this house," Fisher House Board of Directors President Kim Michalowski said.

"Great competition, great morale with the rest of the people here and, again, for a great cause," U.S. Coast Guard petty officer Colin Beres said.

A cause that unites servicemen and women under one goal and gives Bill Anderson a chance to honor his fellow veterans who never made it home.

You can help out too even if you weren't at the Armed Forces Challenge. Visit this link for more information.