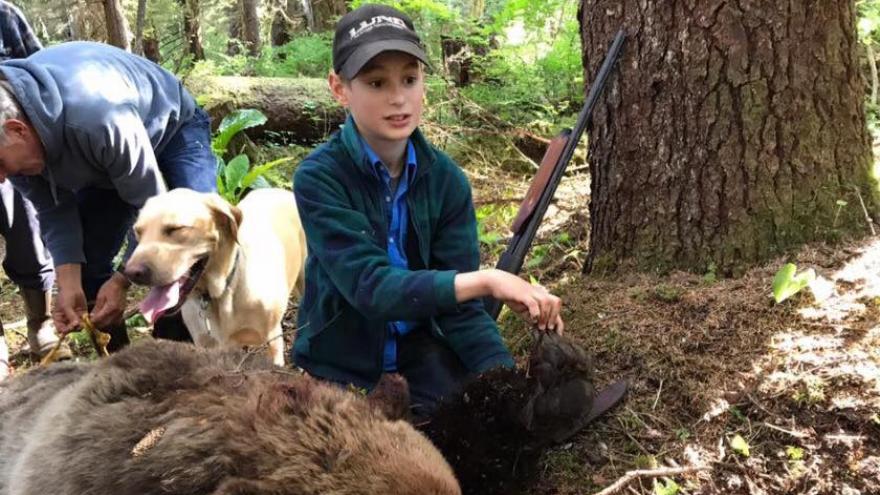 Elliot Clark was walking through the woods near Game Creek last week with his three family members and three dogs when the bear came out and charged them, The Juneau Empire reported.

The bear ran through two of the men, pushing them to the side of the trail, leaving Elliot and his cousin left in its path, Elliot's father, Lucas, said.

"There was four of them in a line . My son was third," Elliot's father said. "The bear came down the trail at them, fella in the front, who was his uncle, the bear was on him so quickly that he didn't have time to take his rifle off his shoulder."

The boy then raised his pump action shotgun and shot the bear with birdshot.

His father said the first shot did nothing, but two more downed the bear and finishing shots by the boy and his uncle killed it.

"What bravery," Alaska Senator Shelley Hughes posted on her Facebook page, with photos of the incident:

Elliot's father said not getting around to putting a sling on his son's gun might have saved their lives, as he was able to quickly ready himself.

"He was carrying it in his hands rather than on his shoulder," he said. "That was the problem with the other ones, when the bear came at his uncle, he had his rifle on his shoulder and the bear was very close, so he couldn't get it off in time."

The incident was the first Defense of Life or Property killing in the Hoonah area this year, Alaska State Trooper spokeswoman Megan Peters said.

In a separate incident in Alaska, a man survived unscathed after a bear climbed on top of him, wildlife officials said.

The bear approached the man and his Rottweiler as they were walking near Dredge Lake in Juneau on Friday, said Tom Schumacher with the Alaska Department of Fish & Game. The dog had been walking about 50 feet ahead of his owner when he returned to the owner being chased by the bear, Schumacher said.

The man led the bear away from his dog by waving his arms around and yelling, then sat down on the trail to avoid being knocked down when the animal approached him. The bear got top of the man, Schumacher said but it did not bite or scratch him. The man fought back by kicking the bear while the dog was barking and biting its back end.

Officials believe the bear was defending its cub.

"Unlike the situations up north, where black bears made predatory attacks on people, this appears to be a defensive situation where the bear thought the dog was threatening its cub, and the bear encountered the man who it also assumed was a threat," Schumacher said. "Still, we don't like it when bears behave this way toward people."

Schumacher believes there are at least four sows with cubs near Dredge Lakes and the Mendenhall Visitors Center, which he said is more than usual. Bears had an above-average reproduction rate after mild winters, according to Fish & Games' June press release.

The U.S. Forest Service and Alaska Department of Fish & Game were unsuccessful in their search for the bear that threatened the man and his dog.

Asked whether people should be worried about the recent rise of incidents with bears, Rick Sinnott told CBS News correspondent Jeff Glor: "Well it's good to be careful in bear country." Sinnott is a wildlife biologist who worked for 28 years at Alaska's Department of Fish and Game.

"It hasn't happened in Alaska, they have two black bear attacks two days apart. There's only been six predatory black bear attacks in Alaska that I know of I think in history. So all of the sudden to have two in the course of two days, it's a lightning strike," Sinnott said at Bird Ridge, where the young trail runner was killed.