Are Pit Bulls a dangerous breed? 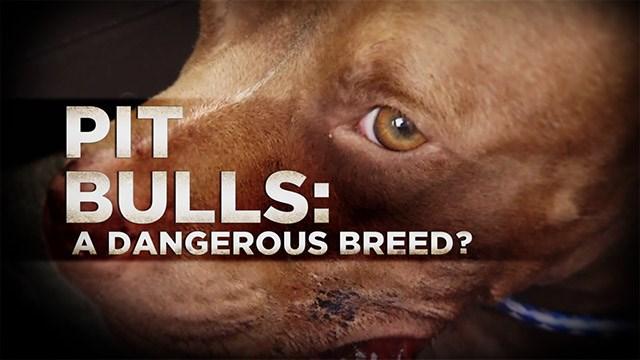 Are pit bulls a dangerous breed? It's a question we started looking at more than two years ago when we discovered pit bulls are the most common breed found in local shelters. The same breed is routinely found at the top of dog bite reports. The answer is clear for some, and others say even posing the question about pit bulls is offensive.

Jeff Borchardt's 14-month-old son Daxton was attacked by two pit bulls that belonged to a babysitter. Borchardt said, \"They went out to their potty break. When it was time to come back in , she opened up the gate and they launched this 15 minute assault on her. They literally ripped my son out of her arms and mauled him to death.\"

\"Half his face was ripped off, his eyeball was hanging out. He was completely stripped naked, his skull was crushed. This was more than a dog bite. This was a mauling,\" says Borchardt.

In the months since that attack, Borchardt's grief turned into activism. He created a website in his son's name dedicated to education and awareness. According to Borchardt, pit bulls are inherently dangerous. \"They're all descendants of these original pit fighting, bull-baiting dogs. That's what these dogs do, and that's why they kill, maim, and maul more humans than any other breed combined,\" said Borchardt.

Dog bite statistics from Milwaukee County from 2012 to 2014 supports Borchardt's argument. Milwaukee Area Domestic Animal Control Commission(MADACC) Executive Director Karen Sparapani says, \"Most of the pit bulls we get are bred in garages or in basements, and they haven't been handled enough by humans.\" She continues saying, \"They're really being bred for profit, and those people aren't concerned with temperament. They just want another litter so they can cash in.\"

Sparapani says many pit bulls are taken from their litters too soon, and never learn to socialize. This pattern can manifest in aggressive behavior, and ultimately, a death sentence at MADACC.

Whether it's because the way pit bulls are wired or the way people treat them, many communities have taken the controversial steps of banning the breed. South Milwaukee and St. Francis are two communities that have banned the breed. In the City of Milwaukee the breed is subject to special rules.

Both Sparapani and Borchardt say the city should enact a mandatory spay-neuter program to help control the population.

Many in the animal community believe any breed-specific legislation of any kind is wrong. The American Society for the Prevention of Cruelty to Animals says, \"All dogs, including pit bulls, are individuals and we should be judging them by their actions and not their DNA.\"

Sparapani says, \"I'm telling you, if a big dog bites, it doesn't matter if it's a great dane, a german shepherd or a pit bull, you're going to get hurt. And I honestly do not believe it's breed related. I really do not in honesty believe it's the way the animal is brought up.\"

After losing his son Borchardt never knew he'd be the one under attack. One comment left on his website said, \"Why don't you put a gun to your head and join your ugly son?\"

\"They can be great dogs,\" says Borchardt. \"I'm sure that's why I get this, because people are attached to their dogs. I love my dog, but rat terriers aren't killing 30 people a year.\"