Are missing students in mass graves found near Iguala, Mexico? 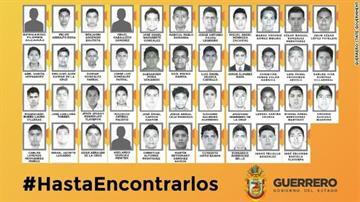 It's been more than a week since that violent night of shootouts in Iguala, Mexico. Authorities say three students were among six people killed in the September 26 violence, and 43 students remain missing.

Where are they? Authorities and witnesses fear they may be close to unraveling the mystery.

Along a dirt road in a remote part of Mexico's Guerrero state, authorities turned up unmarked graves full of human remains on Saturday.

Investigators found the remains of at least 28 people inside the graves, Guerrero State Attorney General Iñaky Blanco Cabrera told reporters Sunday. The bodies were covered in gasoline and burned before they were buried, he said, and it could take between two weeks and two months to identify them.

A tip from suspects detained after the shootouts led them to the grave sites, authorities said.

The missing students, who were studying to become school teachers at Escuela Normal Rural de Ayotzinapa, were mostly young men in their 20s, according to a website state government officials have set up to help in the search.

\"Help us find them!\" the website says, offering a reward of 1 million pesos ($74,000) for information leading to the missing students.

State officials, who've faced sharp criticism over the students' disappearance, released a statement Sunday detailing their investigative efforts. So far more than 30 people have been detained, including 22 local police officers.

The police have denied attacking anyone, according to a government statement on their detention.

But protesters from the school have said officials aren't doing enough.

\"NOW IT IS MORE DANGEROUS TO BE A STUDENT THAN A CRIMINAL,\" one post on a Facebook page dedicated to the school said.

Witnesses have accused police of orchestrating and participating in the shootings.

\"The goal of the police was to kill any person that was inside the perimeter they had,\" one student from the school told CNN en Español.

Guerrero state Gov. Angel Aguirre has defended his government's response and called for calm in the face of protests.

\"To the family and friends of those who were savagely massacred, I offer all my solidarity and support,\" he said in a series of Twitter post Saturday. \"It would be highly condemnable, those who want to take advantage or politically profit from a situation like the one that today overwhelms and saddens us.\"

A bus carrying members of the third division Chilpancingo Hornets soccer club was also among those ambushed in what authorities described as three attacks on September 26. A 15-year-old player on the team was killed.

Omar Sanchez, one of his teammates, described the ambush to CNN en Español.

\"We were just watching a movie and we saw the bullets come in and then it was like we were going off a cliff and the bus tipped over. And it was then that they started firing at us with machine guns,\" he said. \"It sounded so ugly, the gunshots and my teammates screaming, 'Help, leave us alone, we are injured.' A teacher said, 'you have already blinded me, please, we are the team from Chilpancingo.\"

The armed men said they weren't going anywhere, ordering the team to open the door.

When the teacher refused to open the door, Sanchez said, the men opened fire again.

The case has left many troubling questions unanswered. Key among them: Who gave the orders to open fire, and what was their motive?

Since then, evidence has tied the Guerreros Unidos criminal group, and police connected with them, to the shooting and the students' disappearance, Blanco told reporters Saturday.

For years Guerrero state, which includes Iguala and the well-known resort city of Acapulco, has ranked among the Mexican states with the highest homicide rates, a crime statistic regularly used by officials and analysts when discussing the overall security situation.

Figures released by Mexico's National Statistics and Geography Institute last year painted a grim picture of kidnapping throughout the country.

A survey revealed that there were more than 105,000 kidnappings nationwide in 2012, the institute said, but only about 1,300 of them were reported to authorities.