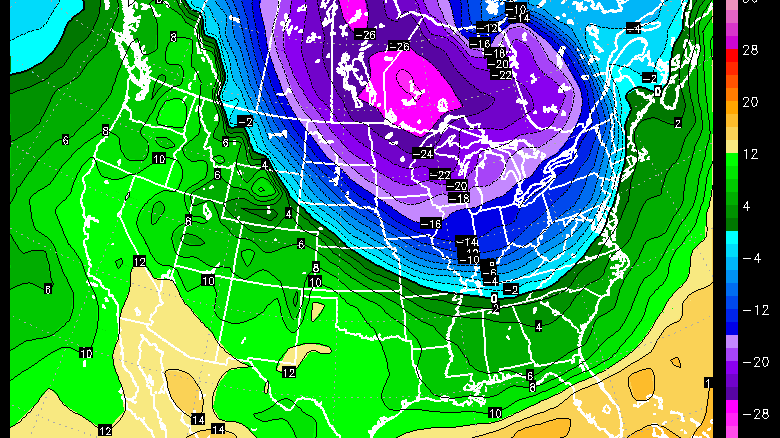 Signs of the latest winter storm have quickly melted away this afternoon with plenty of sunshine and highs around 40 degrees.  Thankfully the forecast trend over the next 5 days will feature some unseasonably warmer temperatures.  By the middle of next week, it will feel like we turn the corner as highs approach 60 degrees; however, that might be fool's gold, because the long range models are showing a big pattern swing with a blast of very cold air.

It's important to note that this pattern could change, but when two of the models show a similar scenario, that usually gets my attention.  Take a look at the picture above.  The upper level wind pattern turns on us by the first weekend in April.  A trough deepens just to the south of Alaska.  This dip causes substantial ridging across the Pacific northwest.  Unfortunately as the west ridges, the upper level winds dive way south across the Midwest.

The next picture shows the cold air that drops south in response to the trough.  That's directly from the Arctic, and it's forecast to head straight for Wisconsin.  This type of air will modify some as it arrives, but it will send highs 20 degrees below average!

The EURO model is also showing this bitterly cold air mass.  Right now it appears the coldest days will be next Saturday into Sunday!  Some flurries or light snow will arrive with the arctic front on Saturday.  Highs could only be in the 20s if this plays out.  Stay tuned...the Brewers home opener could be a cold one.