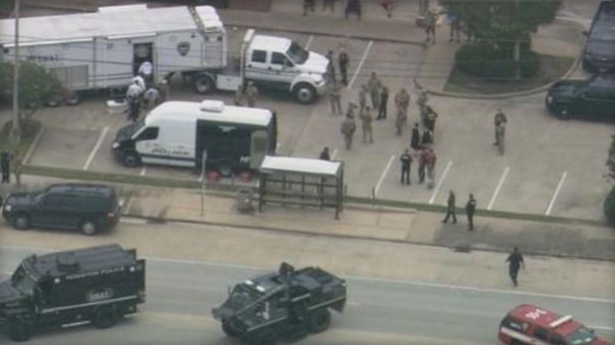 HOUSTON, Texas -- (CBS NEWS) Two people are dead and six others have been injured in a shooting in west Houston, according to the Houston Police Department, CBS affiliate KHOU reported.

One of the deceased is a suspect who was shot by a SWAT officer. The other is a citizen who was shot and killed inside a vehicle, police said.

Acting Police Chief Martha Montalvo said a police helicopter was also shot at with a "high-powered" weapon. KHOU reported the suspects are believed to have had high-powered weapons, AR-15s.

Police spokesman John Cannon says there were two armed suspects involved. One was killed; the other was wounded and taken to a hospital.

Three civilians were among the wounded. Their conditions are unknown at this time. Two officers were also wounded. One was shot in the hand and is expected to be okay.

At least two drivers told KHOU their vehicles were shot at.

Neighbors near the scene of the Houston shooting Sunday said they heard several shots and knew something was wrong.

Stephen Dittoe, lives in house right behind the shooting scene, says he thought it was a transformer.

His wife, Ha, says it went on too long for that. She took their two children into the bathroom and told them to eat breakfast in there, and she called 911.

KHOU was on the scene and spoke with witnesses who said they were shot at by one of the shooters.