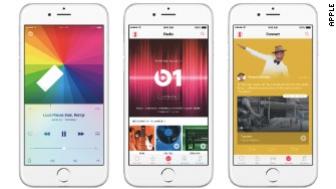 Are you ready to rock?

Apple Music, the company's new streaming music service, launches around the world on Tuesday. It's going up against many existing services including Spotify, Rdio, Pandora, Google Play, and Amazon Prime Music. To compete, it's included a little bit of everything.

This is what you need to know to get started, and some tips to get the most of out Apple's ambitious, overflowing new product.

How to get it

The service is free for three months. (Don't panic, Apple will still pay the music labels during this time, following a highly publicized feud with Taylor Swift.) After the trial, you will automatically be charged $9.99 a month. A family membership is available for up to six people for $14.99 a month.

There's a lot going on in Apple Music and it can be overwhelming. An easy way to get to know Apple Music is through Siri. You can tell it to do all the basics, like play a specific song, album or playlist you've made. Say what to song to put on next, or if you want to favorite something for later.

Get specific and say \"Siri, play the top 20 R&B songs,\" and it will pull directly from the iTunes top charts. If you want to discover new music, ask for genre playlists or just launch a radio station similar to an artists you like, or by theme like Chill or Pop Hits.

Siri's coolest Apple Music trick is that it can find music by date. Ask it to play the top song from the day you were born, or any other important occasion. This is convenient for people planning high school reunions.

Sync your existing music, but don't delete it

Apple Music will scan your existing music library and look for matches in the iTunes catalog. Matching tracks and albums will appear on all your devices as part of the iCloud Music Library, meaning you can stream them anywhere you're logged into Apple Music. It's very similar to Apple's existing iTunes Match feature, though these are not DRM-free.

If you sync you library through Apple Music, do not delete your original music files. This is not a backup method. If you stop paying for Apple Music at any point, you can't just download all the songs onto your computer. However, it will remember them all should you decide to re-subscribe in the future.

Of course, you would already have access to all these songs through Apple Music, but the iCloud Music Library keeps them organized in one view so you can see what you \"have,\" and it saves all your existing playlists. It can match up to 25,000 songs, though there are plans to raise that amount in the future.

The biggest downside to streaming music is that it requires an Internet connection or can eat into your cellular data plan. Apple Music lets you download copies of any available songs, albums or playlists you want to your devices. If you're on a train, out of range, or short on data, you can still rock out. There's no limit to how what you can keep offline or for how long. There's a switch in the app to see what songs are stored locally versus in the cloud.

Seek out new music, or just let it find you

There's no shortage of ways to discover new music in the new app. There are lists of new releases, top charts, and playlists and stations by genre or theme (some put together by real human music editors). Apple has even gone retro and created an actual live radio station called Beats 1 that will play the same content to everyone tuning in around the world, 24/7.

But before getting lost in the app, give Apple a chance to guess what you like. The For You section will try and figure out what music you're into based on a few questions and your existing library and playlists. If it's good enough, you may never have to to do anything else in the app.