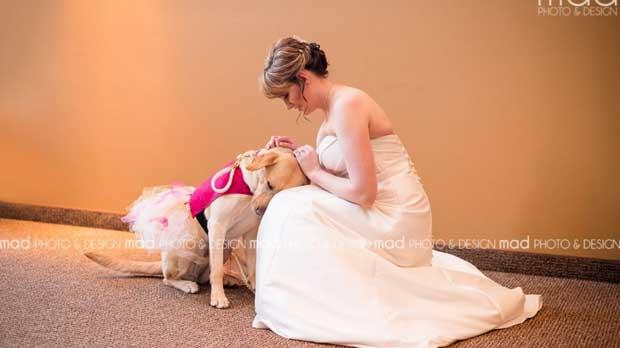 (CBS NEWS) Valerie Parrott was searching for a service dog when a fluffy wide-eyed puppy caught her eye.
Before she could take a closer look, an older yellow lab picked the pup up by the scruff of his neck, put him back in the corralled area and sat on the woman's feet.
It was like the dog was saying, "Hey, I'm going home with you today."
The dog named Bella hasn't left Parrott's side since.
"We joke around that she actually picked me," Parrott told CBS News.
So it's no surprise that Bella, donning a hot pink tutu and service vest, stood by her owner's side on her wedding day in Sioux Falls, South Dakota.

The now nearly 4-year-old dog, who is trained to track Parrott's anxiety and prevent panic attacks, was on high alert on the special day.

"Even when she's out she still has her moments where you can see her service dog aspects kicking in," Parrott said, explaining that she has 15 trained tasks. "She's always working -- even when you don't want her to."

Shortly before the wedding ceremony, Bella's anxiety sense was tingling.

In the other room, Parrott's mom was helping her get into her wedding dress. With her heart beating faster, Bella ran over and nudged her owner.

"She alerts me by licking hands first to get my attention or nudge behind my knee to tell me that I need to sit down or leave the area and take a break," Parrott explained.

Taking Bella's suggestion, Parrott walked out of the room to calm herself down.

Bella leaned up against her legs to balance her weight. When Parrott kneeled down to pet her, Bella laid her head on her lap.

"She was putting weight on me to kind of cause me to focus on her instead," Parrott said.

If it wasn't for the wedding photographer, Parrott might have forgotten that moment.

But one day after her Jan. 9 wedding, photographer Maddie Peschong shared a photo of the touching moment -- and it went viral.

The photo has already gained nearly 1.6 million views on Reddit since it was posted Wednesday.

"It's really exciting to see photos of the two of us; it captures a side of being a service dog team that sometimes you almost forget is there -- we rely on each other so much," Parrott said.