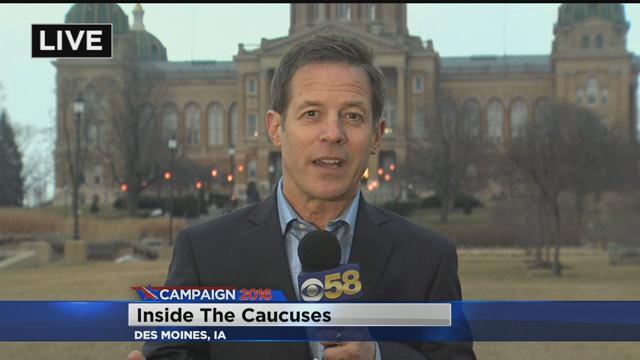 There is a tremendous amount of anticipation here in Iowa's Capital City and throughout the state.

After being courted for months by the candidates, it's time for voters to be heard.

"It's part of the American people to stand up and give your choice and be willing to make that vote, make your decision," said Kathy Harkrader, a caucus attendee.

Diane Kehm is the vice principal of Merrill Middle School.

The school is hosting a democratic caucus in the gym and two Republican caucuses.

Unlike Wisconsin voters who cast secret ballots caucus attendees meet in groups and talk about the candidates first.

After some speeches, voters will scribble their choice on a piece of paper. The votes are counted and announced. The Democratic caucuses are more complicated.

Attendees will break into groups, Clinton supporters stand together.

Sanders' backers in another corner and so on.

"And if once candidate doesn't have 15 percent then....they are not viable right.  So they have to either go home for the night or join one of the two other parties. And that's where there's lots of inviting over come see us this is what we can do. But even the two large group candidates can end up having some people defect and switch sides as well.”

The arm twisting begins at 7 at all 1100 Democratic caucus sites and 900 Republican.

While it's a no no to campaign at polling places on election day in Wisconsin  some of the candidates plan to visit caucus locations tonight.

One last burst of optimism from the candidates today before the voters deliver their verdict in  Iowa.

There is no set closing time for the Iowa caucuses they end when they end.